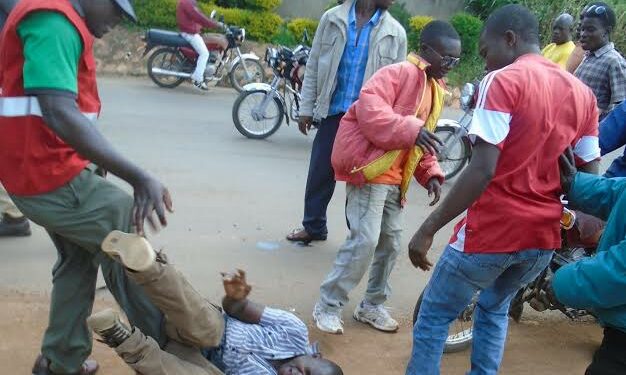 Local leaders in Luwero have blamed Police for the escalation of mob justice in the district.

According to the Police crime report released on May 18th, 2022, Luwero registered 21 cases of people who were killed by mob action in 2021.

Luwero is ranked first in mob justice cases according to the statistics, while Mbarara and Kyenjojo follow each with 18 cases among other districts.

Luwero registered an increase in the number of people killed by mob justice compared to 2020, when 12 people were killed by the mob.

Among the people who lost lives in mob justice in Luwero included  Kenneth Matovu, 25, a resident of the Kalongo miti in Luwero town.  On December 21, 2021 angry residents descended on Matovu and burnt him to death on allegation of being part of the thieves who had stolen a motorcycle belonging to Hamis Muwonge, also a resident of the area.

The deceased’s mother, Marion Naiga alleges that the LC I Chairperson and other residents arrested Matovu at night on his way home and pressed him to reveal the whereabouts of the stolen motorcycle in vain. He denied his involvement in the theft of the motorcycle, before he was burnt dead. Naiga is still crying for justice over the death of her son.

In November, 2021 residents of Nkuluze village in Bamunanika sub county also lynched a man who they allegedly found in possession of stolen goats.

Local Leaders say although they don’t support mob action, but blame Police for the escalation of the crime.

Sperito Kiroli, the LC 3 Chairperson of Zirobwe sub county says that several mob justice cases have been as a  result of animal thefts and motorcycle robberies among other petty crimes.

Kiroli says last year, 30 heads of cattle were stolen in Nakigoza parish but the crime only stopped after residents mobilized each and lynched the suspect whom Police failed to arrest despite complaints.

Nulu Kijjambu, the LC 3 Chairperson of Kikyusa sub county says that residents lost trust in Police for releasing suspects, forcing them to resort to mob justice.
Erastus Kibirango, the LC 5 Chairman of Luwero district says that they have failed to restrain people from mob justice because their efforts to ask Police and Courts to conduct speedy trials, especially on cases involving animal thefts have yielded nothing.

Isah Ssemwogerere, the Savannah Regional Police Spokesperson admitted the rampant cases but declined to comment on the report.

But Richard Bwabye, the Luwero Resident District Commissioner also condemned the mob justice and blamed it partly on authorities for the negligence of duty, residents and lack of transparency by the Police.

Bwabye says that the District Security Committee will sit next Thursday to discuss the crime report and discuss how to restore trust in the Police through drafting measures to stop the thefts.

The crime report also indicated that 77 people were killed in 2021 and the district ranked  third position with highest homicides.