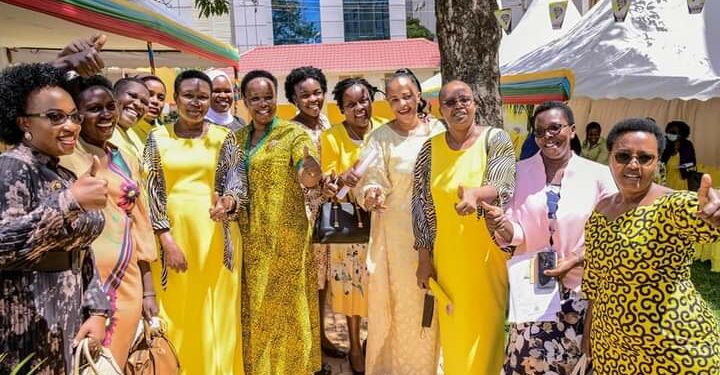 The National Resistance Movement (NRM) has tasked the party women Members of Parliament to mobilise for a massive victory for the party in the forthcoming women’s council elections.

The meeting held on Thursday at the party secretariat at Plot 10 Kyadondo Road according to Richard Todwong, the party secretary-general, followed official communication from the Electoral Commission (EC) about the elections whose process kicks off next month.

According to the recently released EC road map, the electoral process will cover the period between June-August.

“We all know that these elections start from the village to the national level and we also know your importance in your districts and your constituencies. We would, therefore, like you to take the lead in mobilising to make sure that we organise our women at the village level as we progress upwards,” Todwong said.

“We realised that the last general elections caused the party a lot of pain because we did not have enough time to organise the party register. So we are in a conversation with the party chairman and the central executive committee (CEC) to give us that mandate to start arranging the party register in time,” he said.

The directive according to Todwong was issued by the top party leadership to audit the previous party register.

“We had done it so well and we now have over 11 million members and we now know their location, their numbers and the rest. We want to print this register and take it to the villages so that party members at the village level can update their register,” Todwong said.

The Party’s director for mobilisation, Hon Rosemary Nansubuga Sseninde, said in the run-up to this exercise and for early preparation for the 2026 general elections, they target to leverage media to ensure the dominance of NRM messages.

“What we expect from you as MPs is early dissemination of information to the prospective candidates to ensure adequate preparation. We need to encourage credible women to offer themselves for leadership,” Sseninde said.

The national chairperson of the party’s Women’s League, Hon Lydia Wanyoto, had earlier insisted that their target this time around was to score 100% well above the 98% score in the 2018 elections.

“That is why we want to massively prepare and sensitise our women for these elections whose road map is already out and we are starting with immediate effect,” Wanyoto said.

However, the MPs asked the party for maximum support in their mobilisation drive for the elections.

“This is a very good beginning because we are going to move as a team to do something great for NRM and I pray that this coordination should continue so that we can achieve together as NRM,” Beatrice Akello Akori, woman MP Agago said.

The Prime Minister of Uganda, Robinah Nabbanja remarked; “The SG thought it wise to invite us here to put our heads together to see how best we can bring victory to the NRM once again and we shall do it because this a big team, they are able women in their constituencies, therefore, their invitation is timely.”

Responding to the women’s council petition to the President to have their term increased from four to five years as it is with other leaders, the PM indicated that though they had a point, it was too late.

“I know women councils sometimes compete with us MPs, but I request you to be above that politics and help NRM achieve 100% from the current 99% in councils.

We know these women better in our constituencies, we need to help NRM come up with a resounding victory and I will do all I can to support the secretariat using my office to ensure that we come up with the victory, especially in areas where NRM did not do well in the general elections,” she said.

He stressed that it was morally inaccurate to crave to host more than one leadership position and yet the party has many people who need to serve.

“Do not be too greedy, greed can cause us problems. If you are in a position do not fight for another you can’t hold five positions at ago,” Kigongo said.

He went on to task the MPs and other party leaders to be mindful of the language they use in mobilisation.

“I want you to be cool and measure the people you are talking with and do not tell them lies. But show them the way you will get their support. If you don’t mind your language, you can easily destroy the Movement,” Kigongo said.

The current women council office bearers were elected between July and August 2018 and their terms of office are set to expire during the period of July-August 2022.

Uganda given Shs120bn to fight corruption