by Mourice Muhoozi
in National, News
5 1 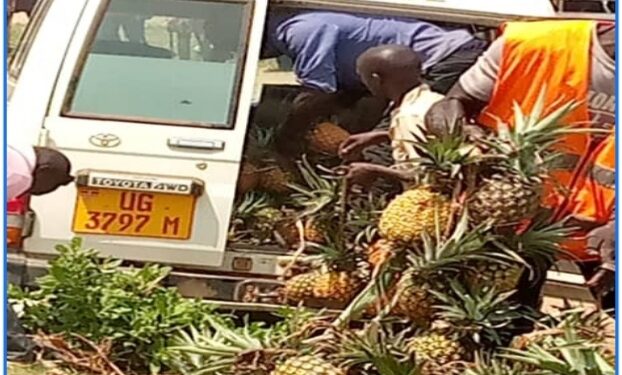 The Ministry of Health has issued a statement, bitterly criticising and condemning a driver in Rukungiri District, who ferried pineapples in a government ambulance.

In a statement released on Thursday, the Health Ministry spokesperson Emmanuel Ainebyoona condemned the act, and said that the misuse of the ambulance goes against Permanent Secretary guidelines to Chief Administrative Officers (CAOs) on proper use of ambulances.

He assured all stakeholders that efforts are underway, to bring the culprit to book.

According to Ainebyoona, the Vehicle, which belongs to Rukungiri District local government had been given to one driver, on assignment to take a patient to Ntungamo district. After doing the job, the errant driver filled the vehicle with Pinneaples intended for sale.

Below is the full statement from the Health ministry:

Our attention has been drawn to a photo of an ambulance registration number UG 3797 that is making rounds on social media. The Ministry has taken keen interest in the matter, investigated and has established the following;

The ambulance vehicle is managed by the Rukungiri District local government. Apparently the vehicle had taken a patient to Ntungamo and on return the driver loaded the pineapples as seen in the picture.

Such behavior is the reason why the government has taken on the centralisation of the ambulance management into a National Ambulance service.

Steps taken:
We have asked the district to take action on the driver as provided in the public service standing orders. The misuse of the ambulance goes against Permanent Secretary guidelines to Chief Administrative Officers (CAOs) on proper use of ambulances.

We assure the public and all stakeholders that measures are being taken to bring the culprits to book and also ensure that this abuse which is not isolated is stopped once and for all.

When the National ambulance service is fully functional with GPS tracking system and call and dispatch communication system, there will be no abuse.

All the ambulance emergency care staff will be centrally controlled and easy to discipline.

Further to this we shall use a medical command and control system where no ambulance takes a journey without authorisation by the Regional EMS coordinator.

We thank the vigilant public that captured this abuse and circulated it. Be assured that disciplinary measures will be taken and you will be informed accordingly.

ANDREW KARAMAGI: My 100-dollar-bet on who will succeed Governor Mutebile