Museveni: Middle income status will be achieved by 2026 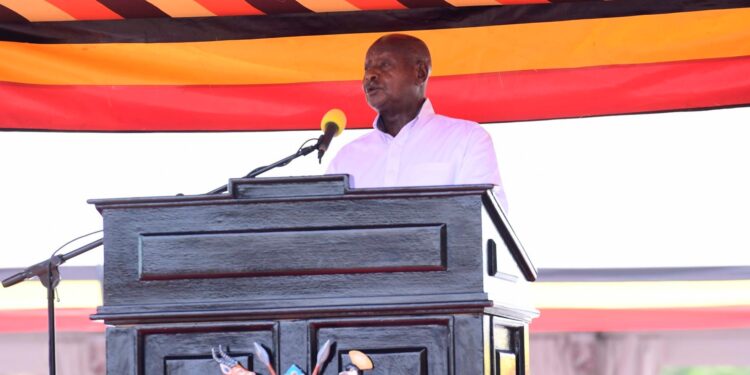 President Yoweri Kaguta Museveni has assured the country that Uganda will achieve Middle Income status by 2026.

Speaking at the 36th NRM/NRA Victory Day celebrations at Kololo independence grounds on Wednesday, Museveni said the economy of Uganda will be 44 billion dollars in July this year compared to 1.5 billion dollars when NRM/NRA came into power in 1986.

“This means that the economy has grown 29 times since that time in size. And in July, the GDP Per capita will be about 980 dollars. That is very close to the Middle-Income status which is 1039 dollars,” adding that Uganda would have achieved the Middle Income status if it hadn’t been for Covid-19. “But in this Kisanja, we shall definitely achieve it because we are near,” he said.

According to President Museveni, this is happening in spite of the increase in the population which now stands at 44.2 million compared to 14 million in 1986. He, however, expressed dissatisfaction with the current level of growth saying its high time Uganda grew rapidly to high Middle Income status.

Museveni said some Ugandans have already achieved that status at individual-homestead or even area levels, citing an example of a group in Rwengaju parish near Fort Portal city led by a one Mr Nyakana who are doing wonders on an acre piece of land through agriculture.

“Our economy will be 586 billion dollars, more than half a trillion which is approaching countries like Turkey and so on. So, therefore, this is what I’m demanding from especially the NRM leaders. You should not be called leaders when you’re leading nobody. If Nyakana and his group can achieve this, why not everybody else who has got land especially,” Museveni said.

Mr Museveni said Ugandans must take advantage of the full potential of the economy in order to upgrade to a high Middle-Income country through the four sectors of wealth creation-Agriculture, Industry, Services and Information and Communication Technologies-ICT.

He congratulated Ugandans for their resilience in observing the strict guidelines against Covid-19 for the last two years. He took a swipe at international media for missing the point at a time when Uganda is shining for containing the global s pandemic by reporting about how girls who got pregnant during the lockdown.

”Being pregnant is not dying. You fellows! Aljazeera, BBC please, can you not understand that being pregnant is a complication but not dying. The original problem, the one we were fighting, was dying on a big scale,” Museveni said, adding that Uganda is among the top most countries in fighting the pandemic with fewer infections and deaths.

He promised to discuss with religious leaders and cabinet to find a solution on whether girls who are pregnant can be allowed in class.

”But what I can tell you straight away-what I will not agree to whatever happens is to condemn the child not to continue with her education because she got pregnant once, that I will not accept. Because if a child made a mistake, you cannot condemn her for the rest of her life,” Museveni said

On security, Gen. Museveni, who is also the Commander-In-Chief of UPDF, reiterated Uganda’s commitment working with the Democratic Republic of Congo (DRC) to defeat the Allied Democratic Forces (ADF) rebels and their activities in DRC.

”ADF is nothing, we shall defeat them. I want to thank H.E Tshisekedi for having allowed us to work with our brothers to finish that little problem,” Museveni said in the presence of a visiting delegation from the DRC that included Security Ministers and Army chiefs.

He also called upon African leaders to exchange views on how to build strength to prevent insurgencies and military coups currently happening in Guinea, Mali and Burkina Faso.

He said if it wasn’t Idi Amin, the East African community would be very far after several countries had applied to join but expressed optimism about how the community is now gaining momentum with the recent application to join by DRC.

At the occasion, 50 people received medals in honor of their contribution towards the development, peace and the liberation of Uganda.

A total of 19 medical personnel were among those recognized with the Golden Jubilee Medal. Prof. Patrick Engeu Ogwang, a Ugandan Pharmacist who invented COVIDEX which is a natural herbal for supportive treatment in the management of viral infections (Covid-19) under his Jena Herbals Uganda Ltd was among the awarded.

Dr. Joseph Cuthbert Epodoi, a senior consultant surgeon and urologist at Soroti Referral Hospital and a team of other 15 medical personnel at the same facility who participated in the successful operation to separate conjoined twins in Soroti after Mulago National Referral Hospital had failed were also awarded with the Golden Jubilee Medal.

Others were athletes Jacob Kiplimo and Peruth Chemutai from Kapchorwa.

The ceremony was attended among others Vice President, Major (Rtd) Jessica Alupo, Ministers, top leadership of the NRM party, Members of Parliament and religious leaders.

The NRM/NRA celebration commemorates the climax of an armed conflict that began on February 6, 1981, at Kabamba Barracks, spearheaded by NRA fighters under the leadership of Gen. Yoweri Museveni.