More than 3,000 households to reap big from the new Namayingo solar power grid

by Mourice Muhoozi
in National, News
3 0 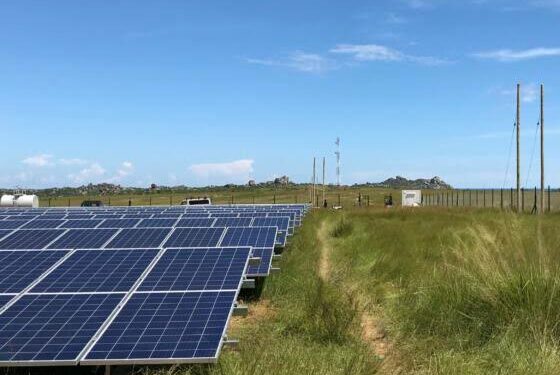 Different households and businesses in Lolwe Island, Bukoli Sub-county, Namayingo district have been thrown into excitement after being connected to the newly installed solar mini-grid.

A total of about 3,780 homes and entities will benefit from this establishment, and this is deemed to end their power woes, after a long period of blackout. The hybrid solar Mini-grid is said to be of 600KW capacity.

The official launch of this mega project occurred on January 14th, 2022, by the Ministry of Energy and Mineral Development. It has been operating since 2017, and is providing renewable and reliable electricity supply to the people on the island.

It is now benefiting about 3020, and 757 businesses and households in Lolwe, Sigulu and Bukoli Island County, which have been at a greater disadvantage for years, due to sporadic power outages.

Access to other amenities like good roads and clean drinking water on the island has also for long been shrouded in mystery.

Namayingo which was curved from Bugiri district in June 2010 is made of 13 Islands and 52 gazetted landing sites.

Ronald Sakwa, a maize milling factory owner at the Island says the solar grid is offering cheap access to electricity. He compared the current situation to the period pre- 2017, and lauded government for such efforts towards improvement of their livelihoods

“Collectively, people are now paying Shs. 14,000, compared to the past when they would pay for private generators at Shs.4,000 for lighting each bulb in their homes,” he said.

The Minister of Energy and Mineral Development, Ruth Nankabirwa, who oversaw the launch of the multi-million solar power plant, urged residents of Namayingo to embrace modern energy technology.

Nankabirwa disclosed that the integrated high-tech investment cost the Government at least 3.2 billion Shillings in subsidies under the rural electrification programme.

Access to renewable energy supply at Lolwe island is likely to revamp the livelihoods of locals, by addressing their urgent needs of cheap electric power supply, needed to run factories, light their homes and also aid in pumping clean water.

United Nations sustainable development goal for 2040 in Namayingo is in line with the hybrid solar mini grid, which targets about 300,000 households.

With more than 3,000 being able to benefit from the current initiative, there is a ray of hope that those left out in this programme will also benefit in the near future.

Tayebwa you are a rear breed of a leader-West Ankole Diocese Bishop Johnson Twinomujuni.