by Stephen Kalema
in National, News
14 1 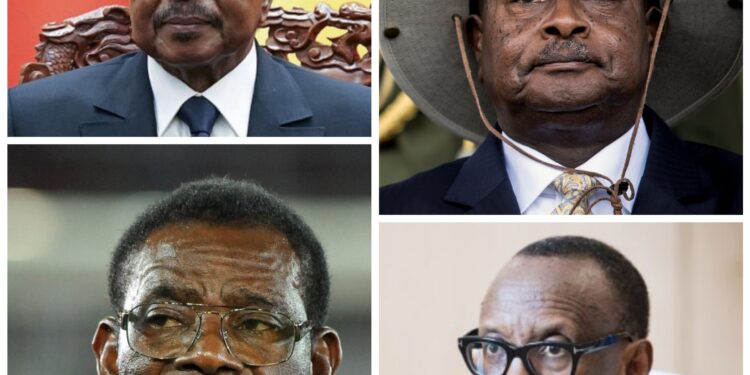 When it comes to a desire of overstaying in power, most African leaders are no exception. Those who have been lucky, have managed to extend their grip by amending their respective countries’ constitutions. Some have done it countless times by doing away with ‘unfavorable’ constitution articles/sections that could bar them from standing again in general elections.

Here are some of the African Presidents who have successfully ‘touched’ their countries’ constitutions in order to extend their stay in power:

He is the 2nd president of Equatorial Guinea since August 1979. He is also the longest consecutively serving current non-royal national leader in the world. Obiang has changed the country’s constitution at least three times: in 1982, 1991 and most recently in 2011 by a referendum. Although he left the term limit to two mandates, each of seven years, he had the age limit of 75 years removed.

The Angolan president ruled for more than 35 years. He was elected for the first time after the death of Angola’s first president Agostinho Neto.

After legislative elections in 2008 in which the party won by a landslide victory, the party started working on a new constitution that was introduced early in 2010. Under the terms of the new constitution, the leader of the party with the most seats in Parliament automatically becomes the president of the country. This amendment helped Dos Santos to rule Angola until he stepped down in 2017.

He was the second-longest-serving president in Africa, surpassed only by President Teodoro Obiang Nguema Mbasogo of Equatorial Guinea, who took power less than two months before dos Santos.

He is the second-longest-ruling president in Africa, the longest-ruling non-royal leader in the world, and the oldest head of state in Africa. He has ruled Cameroon since 1982.

He first ruled the country under a one-party system for 8 years, in 1992 he won the first multiparty elections. After being re-elected in 2004, Biya was barred by a two-term limit in the 1996 Constitution from running for President again in 2011, but he sought to revise this to allow him to run again.

In his 2008 New Year’s message, Biya expressed support for revising the Constitution, saying that it was undemocratic to limit the people’s choice. This happened despite massive protests from the population. His re-election in 2011 did not come as a surprise.

The opposition and critics accuse him of election fraud. Biya has won all presidential elections with 70 per cent and above although international reports clearly tell that his elections are always marred by violence and low voter turnout. And as of 2022, he is the longest-serving non-royal head of state.

Gen Museveni came to power in 1986 through a bush war. In the mid-to-late 1990s, Gen Museveni was celebrated by the West as part of a new generation of democractic African leaders, however, as of now his presidency has been marred by the involvement of human rights abuses and constitutional amendments such scrapping presidential term limits in 2005 and the presidential age limit is 2017.

Gen Museveni has ruled Uganda for over 36 years, one of the weapons he has used to stay in power is the changing of the constitution. One time President Museveni said, “The problem of Africa in general and Uganda in particular is not the people but leaders who want to overstay in power.”

Born in 1952, Idriss Deby Itno began his career as a rebel fighter. In 1990 he overthrew the government of his former comrade Hissene Habre and became president one year later. In 2004, he amended the constitution to allow him to remain in office.

Rebels tried to overthrow his government in 2006 and 2008 but in vain. In 2011 he was re-elected for a fourth term after a disputed referendum. In 2016 he was re-elected for a fifth term. In April 2021, FACT initiated the Northern Chad offensive; Déby was killed while commanding troops on the frontline fighting the militants. He was also succeeded by his son Mahamat ibn Idriss Déby Itno also known as Mahamat Kaka.

He is the sixth and current president of Rwanda, having taken office in 2000. Since ascending to the presidency in 2000, Kagame has faced three presidential elections, in 2003, 2010 and 2017.

On each occasion he has been re-elected by a landslide, winning more than 90 per cent of the vote.

A constitutional amendment referendum was held in Rwanda on 18 December 2015. Rwandans living abroad voted on 17 December.The amendments to the constitution would allow President  Kagame to run for a third term in office in 2017, as well as shortening presidential terms from seven to five years, although the latter change would not come into effect until 2024.

Ismaïl Omar Guelleh is the current President of Djibouti and has been in office since 1999, making him one of the longest-serving rulers in Africa. Guelleh was first elected as President in 1999 as the handpicked successor to his uncle, Hassan Gouled Aptidon, who had ruled Djibouti since independence in 1977.

He was re-elected in 2005. In 2010, Guelleh persuaded the Parliament of Djibouti to amend the nation’s Constitution, allowing him to stand for a third term which cleared the way for him to place his name on the ballot in Djibouti’s 2011 election. The amendments gave him the freedom to contest in 2016 general elections and 2021, which he won though marred with violence orchestrated by the country’s army.

He became the third president of Togo in 1967 through a military coup. after 34 years of brutal leadership and disguised multiparty rule, in 2002, Eyadema persuaded Parliament to amend the constitution to remove term limits allowing him to seek re-election.

These amendments lead Togo into a dynastic succession because after winning the 2003 elections, President Eyadema called for another constitutional change which was to reduce the minimum age of the president to 35 years, rather than 45. He called for these changes to cater for his son Faure Gnassingbé Eyadema who was 35 years.

Mugabe was elected prime minister in 1980 and seven years later, he became president. Initially, he was regarded as a freedom fighter but late, his regime led to a food and financial crisis, Mugabe’s survival shifted from people to the constitutional amendments in his favour.

Following the pressure from the international community, Mugabe formed a new constitution which was adopted in 2013 in which he stood in another election, which he won, unfortunately, he was forced to step down in 2017, after 37 years in power, and died in 2019.