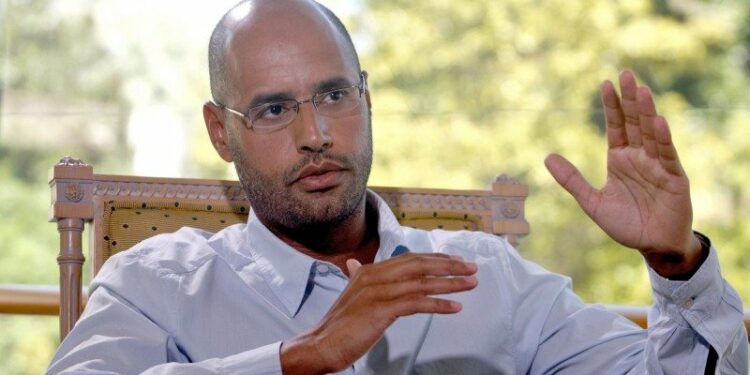 The son of Libya’s longtime ruler Muammar Gaddafi has been given the go-ahead to run in the country’s upcoming presidential election, his lawyer said, a week after being disqualified for what Libyan authorities said were war crimes committed during the uprising against his father more than 10 years ago.

Saif al-Islam Gaddafi’s lawyer, Khaled al-Zaydi, confirmed to Al Jazeera on Thursday that the court in Sebha accepted his client’s appeal, lodged earlier in the day, and that he would therefore be reinstated in the presidential election scheduled to take part later this month.

In disqualifying Gaddafi, Libya’s electoral commission had pointed to articles of the electoral law stipulating that candidates “must not have been sentenced for a dishonourable crime” and must present a clean criminal record.

Western officials have talked up a United Nations-led peace process and insist on “inclusive” and “credible” elections starting on December 24 in the North African country, despite serious disputes over how they should be held, and their credibility.

Libya is seeking to move beyond a decade of violence that has rocked the oil-rich nation since a NATO-backed uprising that toppled and killed Gaddafi senior in 2011.

Gaddafi, who is wanted by the International Criminal Court for alleged war crimes, had registered to run on November 14 but was among 25 candidates whose bids have were rejected by the elections board last week.

It said the 25 had been rejected on legal grounds as well as information from officials including the public prosecutor, a police chief and the head of the passports and citizenship department.

Gaddafi had lodged an appeal in Sebha, but last week a “group of outlaws” launched an “odious” attack on the court, forcing it to shut hours before the appeal hearing, the government in Tripoli said.

He was the first heavyweight candidate to sign up for the election, after emerging from years in the shadows and telling The New York Times in July that he was planning a political comeback.

In the rare interview, Gaddafi said he wanted to “restore the lost unity” of Libya after a decade of chaos.

A rival administration in eastern Libya later pardoned him.

Contested vote
Analysts fear a contested vote, or one with clear violations, could derail a peace process that this year led to the formation of a unity government in an effort to bridge the rift between warring eastern and western factions.

A final list of candidates for the election has not yet been released amid a chaotic appeals process.

Gaddafi, who was sentenced to death by a Tripoli court in absentia in 2015 for war crimes committed during the failed battle to save his father’s 40-year rule from a NATO-backed uprising, is one of several divisive candidates in the race.

He is a figurehead for Libyans still loyal to the former government of his father, whose toppling and death in 2011 heralded a decade of strife. After his lawyer announced the decision, his supporters celebrated in the streets across Sebha, witnesses said.

However, many other Libyans, including in the armed groups that hold the balance of power across swaths of the country, view his presence on the ballot as unacceptable after the bloody struggle to remove his father.

Another divisive candidate who has joined the poll fray is eastern-based renegade military commander Khalifa Haftar, whose Libyan National Army (LNA) controls much of eastern and southern Libya. Haftar, a former CIA asset, has also been accused of war crimes.

Anas El Gomati, a Libyan researcher and founder of the Sadeq Institute, told Al Jazeera that Gaddafi’s reinstatement in the presidential race would erode people’s trust in the electoral process.

“When we look at the process over the last several days, we’ve seen candidates that have been declared ineligible … then reinstated without any legal argument,” El Gomati told Al Jazeera.

“I think it is going to puzzle many Libyans today who have protested the candidacy of individuals like Saif al-Islam Gaddafi and Khalifa Haftar but who are now on the ballot box.”

“It’s a major plot twist but it’s not the last one. I think there’s still a few more to come.”

Mindset change is an engine for Uganda’s Development – Prof. Olum