by Stephen Kalema
in National, News
21 0 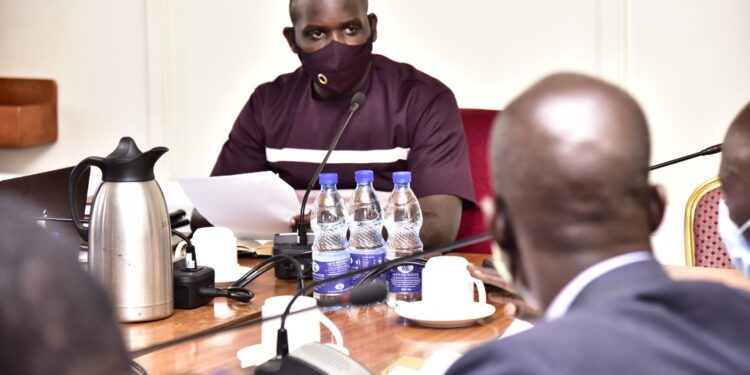 The chairperson of the Parliamentary Committee on Commissions, Statutory Authority and State Enterprise (Cosase) Joel Ssenyonyi has vowed to use extra powers to force Finance Minister Matia Kasaija to appear before the committee and explain the issues surrounding China-Uganda loan deals.

Following the escalating public debate that China is about to take over Uganda’s only international Airport Entebbe due to the loans government received from the Export-Import Bank of China (Exim Bank), on Tuesday the Deputy Speaker of Parliament Anita Among ordered Cosase to take on the issue and find out where the government went wrong in the agreements where Uganda is likely to lose Entebbe to China.

Among went ahead and denied House members from debating on the issue until the committee has come up with a comprehensive report.

The committee immediately issued a letter on 30th November 2021summoning the Minister of Finance Kasaija to appear before its members on Thursday and answer queries on the Uganda-China loan deal.

However, on Thursday Kasaija did not show up nor did he send any notice informing the members about his absence. His absence without notice triggered anger among Cosase members thus forcing their leader also Nakawa west lawmaker to vow that he was going to use extra powers to drag the minister before the committee by force.

Ssenyonyi told the press on Thursday that at least Minister Kasaija would have issued a communication notice to the committee about his absence prior to the day but instead, he ignored their summons.

“So he has chosen not to show up today. Perhaps he does not have the answers which we require. As a committee, we have powers of the High Court. But when you decide to snub the committee, then we engage another gear because we have the power to do that. We are going to summon him using the powers that we have,” said Ssenyonyi.

He added that they are going to issue the summons again and if he dares not to respond to them, then they shall send Police to pick him because he is not above the law. He also asserted that the committee must get the minister’s answers because Ugandans need to know who owns their airport.

It should be recalled that in November 2015, the Ugandan government signed an agreement with the Export-Import Bank of China (Exim Bank) to borrow Shs736.8bn at two percent upon disbursement. The loan had a maturity period of 20 years including a seven-year grace period.

However, it recently emerged that the deal signed with the Chinese lenders virtually means Uganda “surrendered” its most prominent and only international airport.