by Mourice Muhoozi
in National, News
2 0 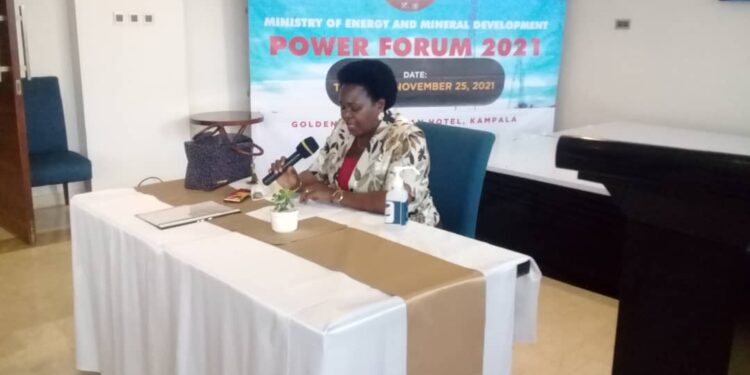 The government of Uganda, through the Ministry of Energy and Mineral Development has uncovered a multi-pronged approach to deal with notorious individuals, who sabotage and vandalise electric power lines, causing power outages in various places.

In a press briefing that took place on Thursday at Golden Tulip Canaan Kampala, the Minister of Energy and Mineral Development Ruth Nankabirwa revealed a series of measures, that government intends to use to curb the crisis of power line vandalisation.

She said that despite government efforts of heavily investing in electricity sector, including its transmission and distribution, the progress has been frastrated by vandals who destroy electricity infrastructure, leading to power outages.

“The nation has experienced power outages due to vandalism of power infrastructure. There have been some cases where segments of the network are destroyed out of malice, including syphoning of oil from transformers causing them to burn, removing copper wires from the transformers, and at times theft of the entire transformer,” she said.

“The interfearence with electricity supply network has caused power blackouts and it has threatened the security of our homes. It has increased the cost of doing business in Uganda and also has an effect on the tarrifs, on the cost of electricity and this disrupts vital health and education services.”

She warned that notorious criminals who vandalised power lines that the effects are long term and could also backfire on them.

“You are in a chemistry lab, a physics lab, biology lab, you are transacting a practical and power goes off, so the efffects of vandals are diverse, the vandals may think that if they get money it will be okay, i just want to say that the effects can get back to them, it can boomerang on them. Either they themselves or their relatives and their friends,” said Ms Nankabirwa.

She also revealed that power infrastracture vandalisation is largely attributed to unregulated metal scraps businesses, saying that most people cut these power metals to be sold as scrap in order to get money.

“The assets argeted normally include wires or conductors, transmission infrastructure parts made of steel, alminium wires, copper wires, transformer oils, poles, underground cables and related accessories. It has also come to our realisation that vandalisation or vandlising electricity assets have a relatiobship with unregulated scrap business in the country, and therefore there is a need to work with Uganda manufacturers association to ensure regulation of the scrap industry,” remarked honourable Nankabirwa.

The minister also revealed how she is working tirelessely, to see to it that perpetrators are brought to book, by engaging several stakeholders like parliament.

“I informed the leader of government business and she is pulling the stakeholders, because it involves other ministries to come up with a regulation, where we see action in fishing out these vandals,” she remarked.

The minister also revealed that the government looses huge sums of money to these culprits, and that a strong response has to be effected. She linked the vice to terrorism, and asserted that vandals should be branded terrorists.

“In the last two years alone, the government has lost over 260 billion USD to vandalism……..and this led to a national power blackout which lasted for 3 hours and there was further load shading for a week in some places in Kampala as affected towers were being replaced….this is real terrorism, this is electricity terrorism and i think we have to deal with them the way we deal with terrorists,” she reiterated.

She also revealed the government’s readiness to confront the perpetrators, like it used to hunt for illegal fishermern, catching immature fish in lake victoria and other lakes, stressing the urgent need to work out an operation mechanism to deal with the culprits.

The security architecture is no exeption in the fight against power sabotage, according to the minister. She stressed the necessity of the involvement of the entire securIty apparatus to make sure that the perpetrators are arrested and brought to book.

“Security forces have to be woken up. Their cardinal mandate, their constitutional mandate is to keep territorial intergrity of the country, and also to keep people and their property safe and i have called up on them, i want to thank UPDF and UPF, who have been attending our preparatory meetings for an attack on the vandals. I will use CID, CMI ISO and ESO.”

She urged the RDS, and DPC’s to be on high alert, and explained that any laxity in execution of their roles frastrates the implimantation of government programmes, and also stressed the need to involve the judiciary.

“I need the judiciary along, such that when we get the vandals, law takes its own coarse. I will work with the ministry for presidency because this is where the RDC’s preside. The minister for presidency is in charge of the RDC’s and the RDC are chairpersons of district security committees.”

She implored UMA to help in identifying the culprits, and added that government is in the proces of revising the Electricity Act, to seriously deal with the perpetrators.

“I call upon Uganda Manufacturers Association to help me point out tgeir colleagues who receive these materials because they know them. In addition we are revising the electricity Act 1999 to have stringent measures for anyone convicted for vandalisation,” she said.
She urged the population to be cautious and report any cases of sabotage and vandalisation to the authorities.

“The general public is therefore called upon to be vigilant and report any suspicious behaviour on the power network near them, the nearest police station or electricity utility company serving them,” concluded Nankabirwa.