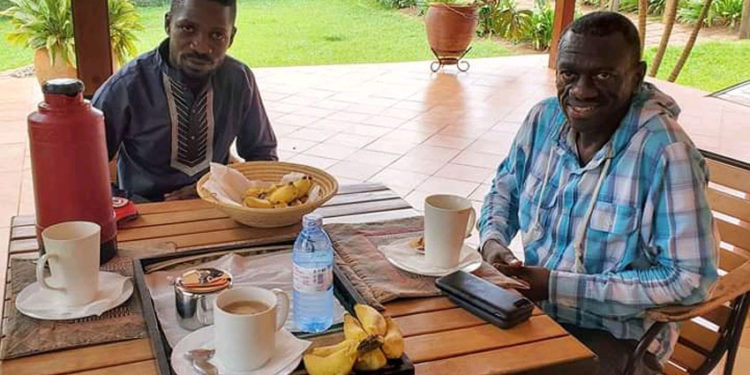 Under the guise of talking to his regional leadership, he booked radio programs in both Mbale and Lira which were frustrated by the state, allowing neither the meetings with his mobilisers.

In Lira, Bobi Wine was informed by the local party leadership that clearance for their intended meeting with their principal was only attainable through the Inspector General of Police- IGP!

Bobi Wine’s catastrophic adventure in Lira and Mbale will undoubtedly return the debate on who is who between him and four time presidential candidate, Col(rtd) Dr. Kizza Warren Besigye Kifefe who just over a month ago launched the red card campaign under The People’s Front for Transition (PFT).

The general question would be on who between the two opposition kingpins posses the bigger threat against the incumbent regime. Who of the two would make Museveni restless and is Besigye’s concert with other opposition players under their PFT is a better strategy in advocating for regime change?

In answering the above questions, Besigye will shockingly risk falling under the shadows of his political offspring- Bobi Wine, going by the impact the two moves have had so far.

Whereas Kyagulanyi was able to paint Mbale and Lira red again with his first two provocative activities, Besigye’s alliance has suffered a largely subtle impact, oftentimes limited to smart sloganeering on radio and TV.

A strategy said to be driven towards breaking Museveni’s spine and possibly force him out for power as a none election technique, there remains very little if any to show almost two months down the road. Yet for Mr Wine, the past action packed week of his drive seems to be just the beginning. Plans to head to Mbarara are already out.

Just like in Lira and Mbale, Bobi Wine plans to disorganise the security, invite it to antagonize his seemingly peaceful activities, regain relevance before his supporters and most likely draw public criticism against the regime- and that’s the politics that has come to define Besigye over the last twenty years, and Bobi Wine, unsurprisingly being a brain child of the former.

The debate on whether this could be a move that will ably push Museveni out of power should be one for another day. It should however be born in mind that Besigye had perfected the art of execution of the strategy over the years on one hand, while Museveni has excelled at putting it out, managing to hung onto power for this long.

MAN VOWS: UNRA to build Kibuye-Busega-Mpigi (KBM) over his dead body. But WHY?