by Mourice Muhoozi
in News
2 0 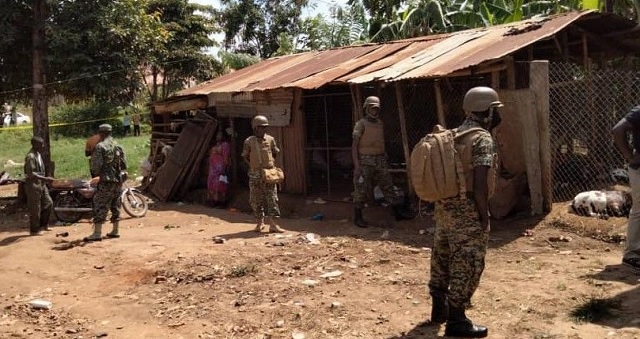 A suspected ‘bomb’ has today morning detonated, claiming a life of a metal scraps trader, and injuring one in Kapeeka Town Council, Nakaseke district.

According to eyewitnesses, the deceased identified as Bukenya Vincent was a trader, dealing in metal scraps and he had done the business for years.

Accordingly, he bought many metal scraps yesterday, including mysterious metals from locals and kept them in his store.

Earlier Thursday morning as he was trying to assemble and refine his scraps, one of the said metals suspected to be a bomb exploded as he hammered it, cutting his body into pieces leading to imminent death.

Eyewitnesses also recounted that his assistant, who stood next to him sustained grave injuries and was rushed to the hospital for treatment.

“A bomb hit a man, a scraps trader, he bought it among the scraps yesterday and he is now no more. His body was cut into pieces. His colleague was taken to a health centre. It hit two but one is not yet dead,” said another eyewitness.

Nakaseke district member of Parliament Honourable Sarah Najjuma urged the government to carry out a cleanup operation and uproot all unexploded bombs, courtesy of the 1980-1986 NRA/NRM bush war, in the greater Luweero region.

“We have been taken by surprise and shock here in Kapeeka, a scraps seller who buys unused metals, he collects them from the locals and keeps them in his store.

Today morning as he was hammering them, a certain metal exploded and hit him,” she said angrily, and added;
“We are calling upon the government, and I have also seconded the matter to parliament, we should be aided, such that war material remains like unexploded bombs and grenades are uprooted, and also sensitize people to be suspicious and cautious of anything they see so as to save lives.”

She raised serious concerns and contended that what happened today morning was just one, in a series of incidents that have been occurring in the Luweero region, claiming several lives.
“…….this is not the first time. We lost one citzen in Kyinyogoga. Residents of Kalagala were also seriously injured after something like this exploded,” she said.
The incident comes at a time when a suspected bomb exploded on October 29th this year, killing two children in Ssegalaye village, Nakaseke district.