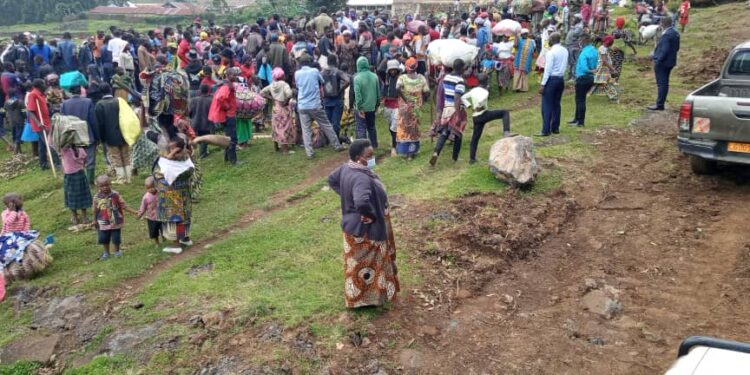 Congolese nationals have flocked Kisoro District following a fight that broke up on Sunday night in the Democratic Republic of Congo between the suspected rebel group of M23 and DRC forces.

Its allegedly that the rebel group managed to take over control of four DRC’s Army barracks of Chanzi, Gisiza, Runyoni and Mbuzi which are located in a distance of about 25 kilometres from Bunagana border.

According to security personnel at the Ugandan/ DRC border who preferred anonymity,the fighting has forced many to flee into Uganda via bunagana border.

According to the source, the majorly affected areas include Kabindi,Rwanguba, Takimonyo, Kyengerero, Karambo, Bunagana among others all found in the Ritshuru District of North Kivu in the DRC.

The number of people fleeing DRC into Uganda is still big as of now and more are expected to come.

Businesses are at stand still as shops are closed in either sides of the two countries as no movement of vehicles with goods in transit to and from the either two countries. Some of the vehicles which were cleared and had exited from customs of Uganda and had not been cleared yet by DRC have returned to Uganda for safety.

However,the security source intimated to our reporter that Rwanda was suspected to be behind the attack as there is suspicion that they intend to sabotage the imminent construction of Bunagana Goma road funded by the government of Uganda .

In 2014,the United Nations security council released a statement that pinned Rwanda as source of funding for the M23 rebels.

Uganda and rwanda have been bickering for close to Three years,and there’s little or no signs that the relations may improve.

Uganda is expecting more refugees from DRC and the fight is expected to continue.

“Situation at the border is still tense , however, security agencies are on ground to monitor and handle it accordingly. More refugees are expected, ” the security source said.