by Stephen Kalema
in News
5 1 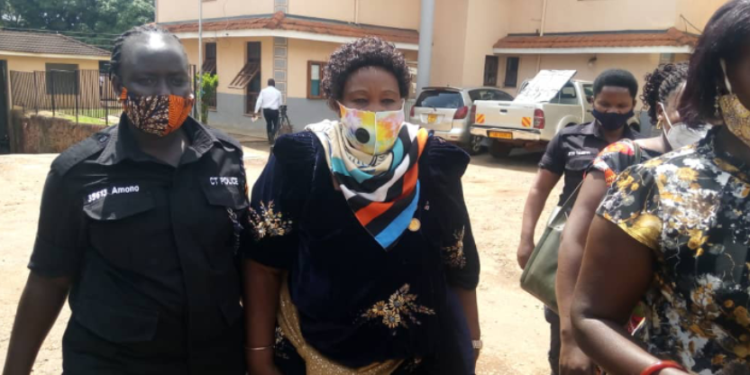 On Wednesday, the Special Presidential Assistant for Under Privileged Youth, Resty Kiguli Nakayenga appeared before Grade One Magistrate, Sarah Namusobya and faced charges of Abuse of Office and Conspiracy to defraud.

Ms Nakayenga, 68, was charged before the Anti+Corruption court with Land Fraud that she carried out using her authority as a presidential adviser to instruct the Wakiso land office to process a fake land title.

According to the prosecution, Nakayenga in 2018, at President’s Office located at Embassy House in Kampala and Wakiso District Land Office, used her office to fraudulently assist Batenda to acquire a land title for the property which was for one Charles Kiki which is an arbitrary act prejudicial to the interests of her employer.

She also went and used her office to influence the Wakiso lands office to process a title for Batenda. Although Batenda had bought only one acre of Land in Kawukuku, he was given six more without considering or consulting the owner of the land in question Charles Kiki who legally owns the six acres.

Using her powers, she went ahead and ordered the Wakiso land office to process a land title of seven acres for Batenda.

Nakayenga’s land fraud act caused a lot of controversies leading to the arising of many whistle browsers pinning Wakiso land offices as a center of land grabbers. This is one of the reasons why last month the Wakiso District Land Office was temporarily closed by the State Minister for Lands, Sam Mayanja.

However, she was granted bail of Shs6m, cash, while her sureties signed a non-cash bond of  Shs100m. Nakayenga was jointly charged with James Batanda of Kungu Lutale Kyengera Town Council in Wakiso District; for Fraudulent Procurement of Certificate of Title. A criminal summons has been issued to Batanda to appear in Court on 17th November 2021.