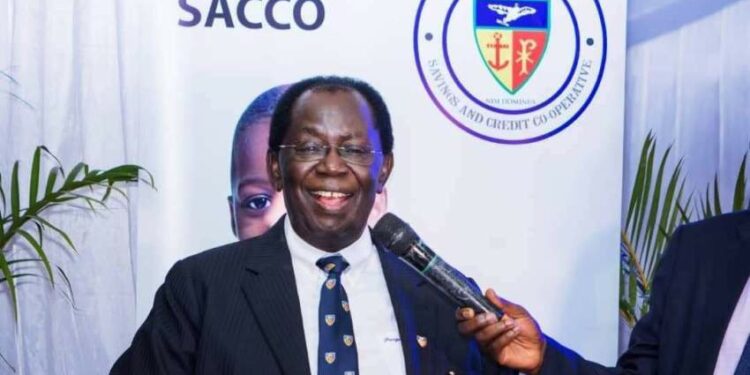 Our former Headmaster, Dr Peregrine Kibuuka was laid to rest today. One of my first encounters with him was at classroom balcony as we chatted with friends during break time. “You move, authority is passing,” he said with a grin on his face, indicating that this was a joke and a command.

That incident was a perfect description of Kibuuka’s management style. He commanded authority without commanding and joked while being serious.

Having gone to Namilyango for HSC from SMACK where we were herded like cattle, there was too much freedom I felt like I was already at campus. Kibuuka was like a civil servant. After 5pm, he would retire to his home which was within the school premises and let students handle their own affairs. We were on our own but we knew he was in charge.

In comparison, at Kisubi the then headmaster Brother Agaba (nick named Hotstepper) was rumoured to have a spy network more efficient than that of a small neighbouring nation. In fact it was rumoured that he would switch off the Power sending the school into pitch black darkness, and would wear the school sweater, camouflaging as a fellow student and head to the dormitories, straight to the toilets where some students used to smoke!!! Those caught used to be expelled the next day.

With Kibuuka, there were no such shenanigans. He preached “education for responsibility” and believed that the best way to groom students into responsible people in future was to let then be in charge of their actions and face the consequences themselves.

While in Kisubi we were dragged out of our beds for morning preps, with roll calls and all, in Namilyango, if you wanted to sleep you would sleep. Kibuuka would say that when you repeat a class, you would learn the importance of preps and he would follow the comment with his trademark laughter. From attending preps willingly, we also had to “bang winter” (reading in the dead of the night in order to score better grades.

Namilyango had had a terrible incident of bullying where a student had been killed by fellow students in the 1980s. Kibuuka turned around this bullying culture by ensuring students interacted with each other on equal footing regardless of their class. “Here, the lion lies with lamb,” he explained the success of the “paradise” he had created where even the most violent of students wouldn’t raise a finger to bully an S.1 student.

Now for me there was one problem with this arrangement. I came from a culture of “no mixing levels” and “respecting elders” in my O’Level at Kisubi. We even had an “equator” in the dormitories where students of a lower class were not expected to cross.

Now here I was in Namilyango, a “would have been elder” had I remained in Kisubi sandwiched by S.1s, S.2s, S.3s and other “juniors” in the food line at the dining hall.

Some guys used to pass on the “highway” (no lining up) and I was told they were prefects. I made up my mind to become a prefect. But there was a little problem. I was from SMACK and the age old rivalry with Namilyango meant I was a weevil. In fact I was a fumbling weevil. While Namilyango referred to SMACKISTS as weevils, the NGO guys were referred to as fumblers.

But then the impossible happened, and it was Dr. Kibuuka the Headmaster. The man was authority itself. He overturned the election and there was no need for deploying teargas because he was the supreme “authority”.

Some of the guys who had won different posts were “savedees”. I and many unlikely victor’s including another weevil “fell in things” because we were Catholics.

Kibuuka explained that in Kibuli the leadership is made up of Muslims and this was a Catholic founded school, so tje leadership question was a no brainer.

Kibuuka always let people do what they wanted but there were consequences. He allowed freedom of worship, but this freedom couldn’t be allowed to interfere with the school running and foundation.

Kibuuka said that the Cardinal might come and he asks his Head Prefect to carry the statue of the Virgin Mary to lead the prayer procession. “What if he says I can’t carry the statue of the Virgin Mary, I don’t believe in those things … this is a Catholic School and these are my prefects,” Kibuuka said after we had been sworn in. Just like that I got a ticket to the highway.

Another story I will tell about Kibuuka was our “social debacle.” Namilyango unlike many other boys schools was allowed to have two socials (what today’s young people call prom) with different girls schools.

So, we had chosen Namagunga and Nabisunsa because it had a good relationship with and proximity to Namilyango. The letters were dispatched and the Headmistresses accepted. Then my other weevil friend EMB told them of a memorable social we had had with Gayaza girls in O’ level. He told them of how 90% of the girls who had jumped off the Gayaza bus were savedees but two hours later they had “backslid” and were dancing in ways that would make the devil weep.

A decision was made by the social committee to cancel the Nabisunsa letter and invite Gayaza. But first was the Gayaza invitation which was dispatched and accepted.

See, we had to get an acceptance letter before we would cancel the other engagement. It turns out Kibuuka had not taken count of our invitations until he was asked to cancel the Gayaza letter. Hell broke loose.

Kibuuka said there was no way he would cancel his signature. If it meant serving the girls from the third school posho, so be it. He actually addressed the school assembly on the issue.

“My casanovas in S.6 have confirmed three girls schools for socials. They are behaving like Muslims. My poor S.4 boys are like priests they have failed to convince a single girls’ school have social with them,” he laughed off the matter.

If my memory serves me right, it is the Deputy headmaster who was tricked into cancelling the Nabisunsa letter!

I can go on and on about Kibuuka but this will be the last one. In our HSC, we were that odd Arts class that was doing Sub Maths. Kibuuka using his authority had dictated that we must study Sub Maths. Other schools were offering a combination of four subjects and they would beat us to the govenrment scholarships at university!

We saw no correlation between studying Pythagoras theorem and the French Revolution. Kibuuka said he was preparing us for the future, not just a matter of scoring As in Art, Luganda and Arabic for the sake of passing exams.

“The days of philosophers like Aristotle and Pluto are long over. You are not studying to go to City Square and talk the whole day and earn earn living.”

True, none of the studenrs in the Arts class that year made it on govenrment sponsorship because Sub Maths like General paper weighed just one point while those offering a fourth subject had six points at their disposal in case of an A.

Rather than change after this debacle, Kibuuka pushed for education reforms that are partly responsible for today’s A’ Level weighting system.