US donates over 2 million Covid19 vaccination doses to Uganda, see how embassy in US marked Independence day 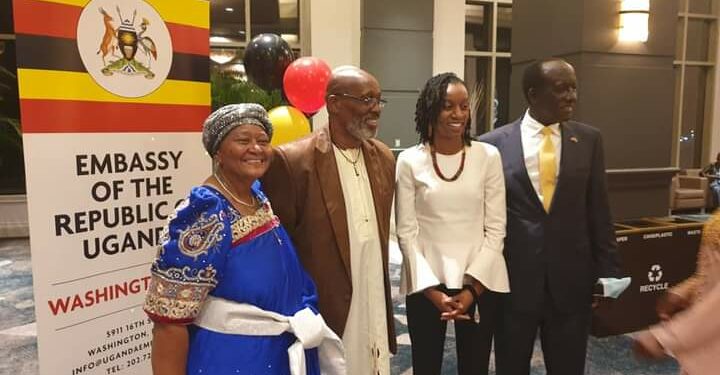 The Embassy of Uganda in the United States marked the 59th Anniversary of Uganda’s Independence with a Reception at the Bethesda North Marriott Hotel and Conference Center in Rockville, Maryland, on October 15th 2021.
The Chief Guest was Ms. Chidi Blyden Rowe, Deputy Assistant Secretary of Defense for African Affairs at the Pentagon, representing the U.S Government. Also present were, Heads of Missions from the African Diplomatic Corps, Uganda Community leaders and US business personalities as well as civil society representatives.
In his remarks, Ambassador of Uganda to the United States, Mull Sebujja Katende called on all Ugandans in the United States to love their country, defend it, ensure its stability, and make it prosperous. “The unity of our people is another hallmark that defines our treasured independence. Unity, however, does not mean that we as Ugandans agree on all things… but it is a requirement for our country to be able to maintain the stability that will further enable us to invest in it without fear”, he said.

Speaking about relations with the United States, Amb. Katende said that Uganda and USA have been closely cooperating and collaborating in the promotion of regional peace and security, including the fight against terrorism.
“Without peace and security in our region there can be no development and without development, peace and security are not durable” he said.
Amb. Katende stated that the Government of Uganda will continue to invest in the Security sector because of its conviction about the importance of stability in the quest for prosperity. He reiterated the Government’s appreciation for the support by the U.S in terms of training, assets, and other technical support.
Expressing the gratitude of the people of Uganda, he added that the U.S has supported Uganda’s response to Covid-19 both financially and technically especially in terms of data management, risk communication, health worker training, strengthening the supply chain and increasing cold storage capacity that has enabled vaccine uptake across the country.

He reminded the guests that the U.S has also directly provided to Uganda 2,321,350 Covid-19 vaccine dozes (1,674,270 dozes of Pfizer and 647,080 dozes of moderna) in addition to earlier ones under the Covax arrangement where U.S is the leading donor.
The Chief Guest, US Deputy Assistant Secretary of Defense for African Affairs, Ms. Chidi Blyden Rowe, congratulated all Ugandans on the 59th Independence Anniversary stating that the United States would continue to work with the Ugandan Government as it builds a prosperous, democratic and secure country.
She noted the challenges occasioned by the covid-19 pandemic as well as the support rendered by the US Government to Uganda is curbing the spread of the disease. She thanked the Ugandan Government for the role played in the fight against terrorism and conflict in East Africa and other parts of the globe. “I would be remiss, in my capacity as the Deputy Assistant Secretary of Defense for African Affairs, if I did not acknowledge and thank Uganda for its tireless efforts and sacrifices as the largest troop contributor to the African Union Mission to Somalia AMISOM”, she said.

Ms. Rowe pledged the continued support of the US Government for AMSIOM in 2022 and for African-led efforts to support conflict resolution and bring peace on the continent. She saluted the generosity of the Government of Uganda in offering to provide temporary assistance to evacuees from Afghanistan.
The guests were treated to a Ugandan buffet and the celebrations were marked by cultural performances from all four regions of Uganda by the Mbuutu Cultural Ensemble with enthusiastic participation of the guests.
The October 15th Reception was the culmination of, a series of events throughout the month of October to mark Uganda’s 69th Independence Anniversary in the United States. These included a Ugandan community celebration in the Washington, DC, Maryland and Virginia sub-region, marked by a soccer match between Uganda and Liberia, followed by a picnic and barbecue on 9th October, 2021 in Burtonsville, Maryland. The 59th Independence Anniversary was also celebrated in various communities across the United States, in California, Chicago, Ohio and Massachusetts and a written message by the Ambassador sent out to those communities. Amb. Katende was also hosted to a Radio Interview on Radio Uganda Boston, on October 3rd 2021 in which he shared messages of hope and gave updates to the Ugandan Diaspora in the U.S on changes on Consular Services, and took questions and provided answers to callers.

During the last two weeks of October, there will be a National ID enrollment outreach programme by the National Identification Registration Authority (NIRA) in partnership with the Embassy and the Uganda North American Association (UNAA) dubbed “Ffuna Ndaga Muntu”. The objective is to bring Consular Services closer to the people.