by Mulema Najib
in News, Politics
9 1 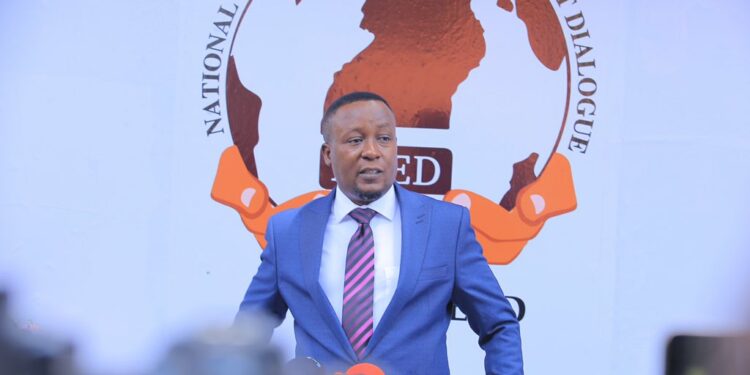 Joseph Kabuleta during the launch of NEED

Unveiling the National Economic Empowerment Dialogue (NEED) in Kampala on Tuesday, Mr Kabuleta said the political movement is constituted of politicians who currently hold no office but have influence in their respective sub-regions and are able to start meaningful discussions that shall see Ugandans fight for their resources.

“On average, winners at Parliamentary level get 30-35% of the overall votes;and the other 65-70% goes to losers. Therefore, that massive fraction of the electorate that voted for would-be silver and bronze medalists feels disenfranchised. Therefore, there’s a NEED to harness those wonderful ideas from runners-up by offering them a platform to express them,” he said.

Mr Kabuleta noted that as NEED, they will focus on holding conversations throughout Uganda that will change the political dynamics of the country.

“The people who have held us captive for three and half decades seek to control not just our wealth, but also our conversation. They have the machinery to control the former, but we must never let them dominate the narrative. We know that every meaningful change starts with a conversation. We realize that the deprived people of Uganda cannot aspire for things they don’t know about and they will not know until we tell them about the resource heritage unique to every region of this beautiful country.We should go back and create awareness, when people get to know about it, they will fight for it,” Mr Kabuleta asserted.

“People who take our resources have worked so hard to keep us poor because a poor person cannot have a meaningful conversation. Our country is being take away from us so we want to make sure that it does not happen so as people we should start talking about things that matter, and what matters are the resources.”

The former journalist also stated that Uganda’s politics is built on personality cults and as NEED they need to change the narrative by creating a dominant ideology.

“If we stay in the politics of personality, there’s no guarantee that we shall not replace Museveni with Museveni. In the next political dispensation, we want the issue of economic empowerment to be at the front.”

Ali Babi, one of the NEED delegates from Bunyoro region said through the political movement, they are going to be able to change the mindsets of Ugandans especially the youth to fight for what rightly belongs to them in their respective regions.

“Every region has its unique wealth so as NEED we are here to create awareness of such wealth so that people fight for it. In the end we shall all be economically empowered,” Mr Babi remarked.