The Ambassador said Qatar has a strategy to strengthen relationships between its government and Africa through investment and trade. 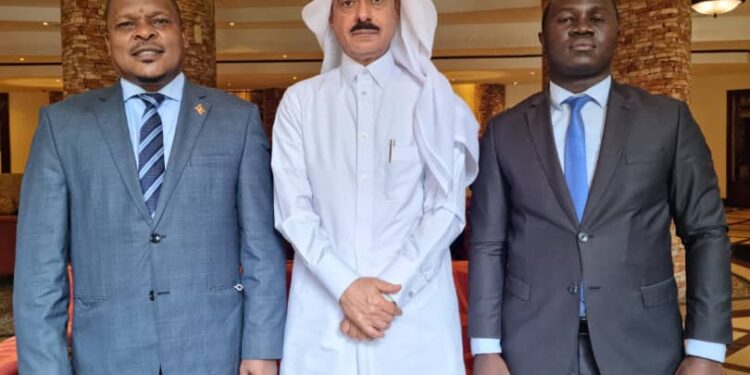 This has been revealed by The Qatari Ambassador to Kenya H.E Jabor Bin Ali Al-Dosari who is in Uganda for a five day working visit. The visit is aimed at building and strengthening bilateral relations between Uganda and Qatar.

Meeting Uganda’s Minister of Works and Transport Gen Edward Katumba Wamala at the Ministry headquarters in Kampala on Tuesday, Ambassador Al Dosari said Qatar has investments in Europe,America as well as Africa and it was high time Uganda also benefited from the financial muscle of Middle Eastern country.

He said Qatar has a strategy to strengthen relationships between its government and Africa through investment and trade.

“The Emir of Qatar Sheikh Tamim Bin Hamad Al Thani  recently allocated a special fund with a sole purpose of strengthening relations of which Uganda is among the 10 countries which were considered by the government of Qatar,” Ambassador Al- Dosari said.

“So I’m looking to increasing the Ugandan side. We take vegetables and fruits from Uganda but there are a lot of things we can take from Uganda. We need to sign agreements and at the same time we are looking for opportunities in the Ministry of transport on how we can work together especially in the investment area.”

The Ambassador also promised that Qatar will open an Embassy in Uganda and also through its State owned flag carrier- Qatar Airways will set up an Airline hub where it will offer direct flights from the East African country to other regions.

“Once we set up a hub here, we shall build airports in Uganda, offer trainings to Uganda Airlines staff as well as other aviation services. Qatar is willing to invest in Uganda’ different sectors so that both countries benefit socially and economically,” Ambassador Al-Dosari stated.

Gen Katumba said in his docket they are looking mainly at airline; how the two airlines can work together for development.

” You know Qatar Airlines is highly advanced so we could pick a few things from them. We have also encouraged Qatar Airways to operate at Entebbe International Airport as a hub for them to be able to reach out to other countries in the region because Entebbe offers a lot of advantages in terms of reach out on the continent and even in the region,”Katumba noted.

” We also informed them of the virgin areas of investment like in water transport.”

His visit has been coordinated by his colleague Ambassador Dr Rashid Yahya Ssemuddu.

In the last few years, Qatar, the oil rich country has focused on pushing for development projects throughout Africa through investments, humanitarian aid and projects, business deals, and support for start ups in promising locations.

Recently, the Emir sent a delegation to Uganda to lookout for investment opportunities and anytime from now, a good number of projects are likely to be implemented in the East African country.