by Mubiru Ivan
in National, News
33 2 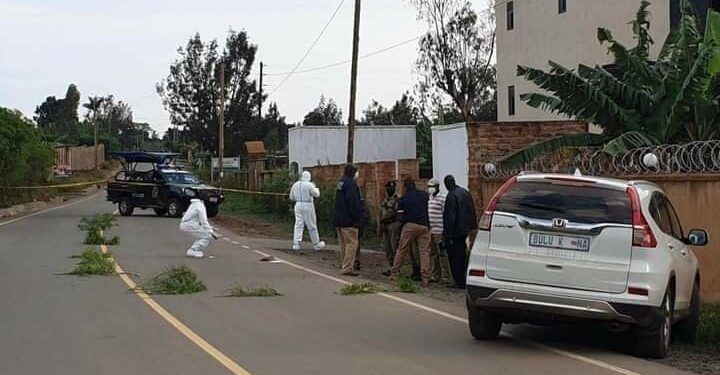 Crime scene where Agaba was shot from

Police in Mbarara City is hunting for a yet to be identified assailants who shot dead the Officer in Charge- OC of Ruharo police post Officer Richard Agaba.

According to Samson Kasasira the Rwizi region police spokesperson, Agaba was killed while on duty doing patrol alone in his area of command on Tuesday night.

“Preliminary investigations show that Agaba received a telephone call from a Boda Boda rider Muzamiru Kiiza that armed robbers had attacked Step Up bar in Kiyanja cell, Ruharo ward. He together with a vigilante James Tumusiime rushed to the area, but found the thugs had fled,” Kasasira said.

“Agaba and Tumusiime mounted a search on the thugs, but fell into their ambush and shot Agaba dead. The assailants took off with the deceased’s gun.”

Kasasira added that Agaba was rushed to Mbarara Regional Referral Hospital where he died upon arrival at 3:00am.