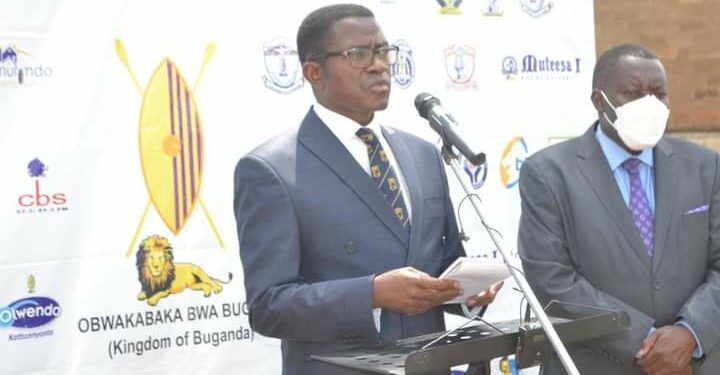 The Prime Minister (Katikkiro) of Buganda Kingdom Charles Peter Mayiga has revealed that Kabaka Ronald Muwenda Mutebi II is back in Uganda.

Addressing journalists at Bulange Mengo on Monday, Katikkiro Mayiga said Ssaabasajja Kabaka came back in Uganda from Germany over the weekend.

While in Germany, Katikkiro said the Kabaka recieved medical treatment from medical specialists and also executed his duties at Kabaka’s Foundation.

“Ssaabasajja Kabaka came back to Uganda on Saturday and we have high hopes thst his health condition will improve more after meeting medical specialists in Germany,” Katikkiro Mayiga asserted.

Kabaka Mutebi left for Berlin, Germany early last month and he was warmly welcomed by his subjects who live in the Western European Country.

During his meeting with President Yoweri Museveni at State House Lodge Nakasero at the beginning of August , the Kabaka reportedly told the fountain of honor that he had not been well health-wise and he was planning to travel abroad to seek better treatment.

He also told Museveni that he was to use the same trip to meet and interact with his people who live and work abroad.

In April this year, Katikkiro Mayiga revealed that Kabaka Mutebi was suffering from allergies.

Addressing the media at Bulange Mengo, Katikkiro Mayiga said the Kabaka had never been poisoned as it was being claimed by some people on social media.

The Katikkiro further stated that the Kabaka’s health was being managed by appropriate medical experts.

The Katikkiro’s remarks followed complaints from a section of social media users who tasked the former to provide details regarding the health condition of the kabaka after making a public appearance during his 66th birthday celebrations at Bulange Mengo where he looked sick and frail.

Parents, Students Urged to Make Use of Makerere University’s 30% Tuition Cut at MUBS-Jinja Campus Ahead of New Intake

Ugandans protest over illegal entry of Rwandans into country

Ugandans protest over illegal entry of Rwandans into country