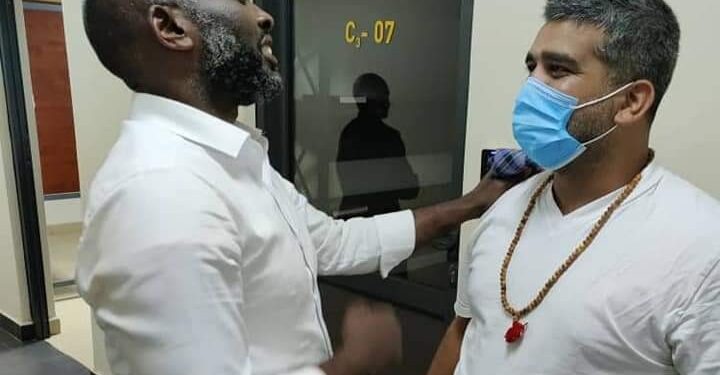 Dr Lawrence Muganga with Rajiv Ruparelia, the Managing Director of Ruparelia Group of Companies after his release

According to social activist Frank Gashumba, Dr Muganga was set free by the security agency on Friday evening following the intervention of President Yoweri Museveni.

“We would like to thank the media houses i.e NTV Uganda, NBS TV, and other media houses, Facebook community, and everyone else across the various social media platforms who put their voices and power together to push for the the eventual release of, Dr.Lawrence Muganga following his unlawful arrest and detention,” Gashumba said in a Facebook post.

“The power definitely belongs to the people, and none of this would have happened without all your efforts!We will be releasing an official statement tomorrow on this matter, so stay tuned to our platforms.We would also like to thank President Museveni for his intervention in the matter that saw the immediate release of Muganga,” he added.

The Uganda People’s Defence Forces (UPDF) on Thursday confirmed having Dr Muganga in their custody.

The army Spokesperson Brig Flavia Byekwaso moved to end speculations online reports that Dr. Muganga was kidnapped. She said reports were false but rather the top academic was arrested by the armed forces in connection with espionage and illegal stay in Uganda.

“Social media reports that Vice-Chancellor Victoria University Dr. Lawrence Muganga was kidnapped are false. He was arrested by joint Security Forces in connection with espionage and illegal stay in the country. Investigations into the matter have commenced,” Brig Byekwaso tweeted yesterday.