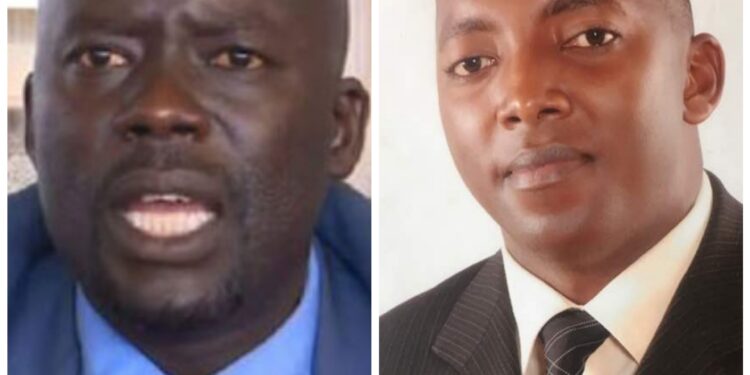 Otto, who lost his fifth successive parliamentary bid this year vehemently launched a regrettable offensive against late Lokech whom he grossly portrayed as a dirty police officer who used his power to witch hunt the former Forum for Democratic Change (FDC) stalwart.

One such Ugandan who seems to have been massively irked by Otto’s unbecoming criticism is National Communications Assistant to President Museveni as NRM National Chairman, Joseph Mukasa Ssewava.

The angry Museveni’s man described the actions of the former legislator as uncalled for, strategically lame, and a timely mistake that should cause him shame wherever he goes for the rest of his life.

” He is now a cursed man. No society in Africa condones preaching hate against a dead person, but Otto has shamelessly done it. May his curses follow him to the grave,” Ssewava lamented.

He also added that he has come to wonder why it took Otto’s constituents two decades to realise that their representative was ” mentally impaired” before discarding him from his legislative duties until January this year.

Ssewava cautioned Otto to handle his despair calmly and carefully so as not to use other people as excuses but having himself to blame for falling his constituents when he turned himself into a political war mercenary to fight wars not meant for him.

He further added that had Lokech been solely the reason for Otto’s political downfall as he claims, then he wouldn’t have been involved in repeated scuffles with other leaders like Speaker Jacob Oulanyah whom he has perenially mounted and abused. He also returned the January 2020 ugly scenario at Parliament where Otto was hospitalised due to punches by Kilak MP Gilbert Olanya.

“If he can get punched into hospitalisation by a member of his party FDC, how can he shamelessly keep convincing us that Lokech was witch-hunting him! This is ridiculous,” Ssewava exclaimed.

Although he noted that his prayer is that Otto never gets into any leadership position again, Sewava tasked the veteran lawmaker to work on his image which he says has gone to the dogs. He further opined that the embattled lawmaker might need to go to a rehabilitation center for the effects of his political misfortune in Aruu seems to be taking a mental toll on him.

Meanwhile, Ssewava described the fallen police boss as a selfless, fearless, and irreplaceable soldier and statesman that will forever be missed by Uganda.

He appealed to leaders in the military and politics to embrace the ideals of humility, selflessness, honesty, and transparency to lay a strong moral foundation for the next generations.

He conveyed heartfelt condolence to the Uganda People’s Defence Forces( UPDF) and Uganda Police Force (UPF) where the deceased has worked, the people of Acholi where he hailed from, and the grieving general public for the sad loss of a hero.

BBNaija: Maria’s Hate for Whitemoney greater than her love for Liquorose

BBNaija: Maria's Hate for Whitemoney greater than her love for Liquorose