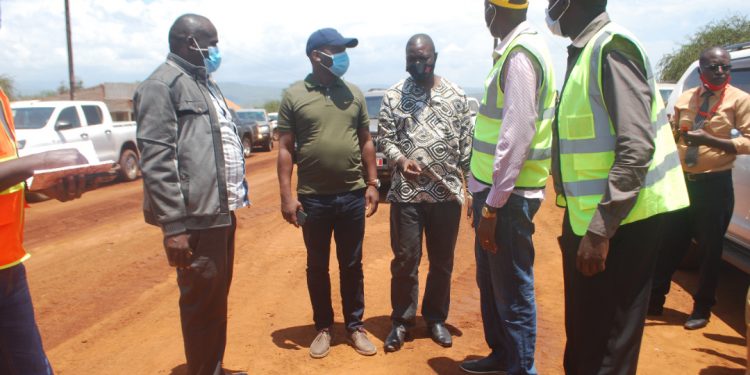 NAKAPIRIPIRIT – The delayed construction of the Muyembe-Nakapiripirit road has been blamed on delays in acquisition of materials sources and emergence of Covid 19.

The Turkish construction firm, Polat Yol Yapi says that although they acquired a quarry at 37+500 Km and was approved in November 2020 by the Central Government Valuer, National Environment Management Authority [NEMA] is yet to give an approval to the Environment Impact Assessment report.

Polat Yol Yapi, signed a contract with the Uganda National Roads Authority (UNRA) in November 2019 to tarmac the 92.2km from Muyembe to Nakapiripirit in 36 months but UNRA now says they are behind schedule and might not complete the road in the contract time of three years.

Polat Yol has been clashing with local people, LCV chairpersons of Nakapiripirit, Kween, Bulambuli, MPs of the three districts and RDCs, because of the delayed execution of the works on the 92.2Km Muyembe-Nakapiripirit project.

Eng. Arafat Magdad Saad, the contractor manager told a meeting at the camp after inspection of the road by UNRA that although they have got the site for quarry approved by the central government valuer, they are yet to get an approval from NEMA with EIA to start crushing the rock for the materials required in road construction.

He said further that the road construction delays that have brought them in collision with area MPs, local government leadership and other stakeholders are due to the fact that by the time of commencement on 30 March 2020, Covid 19 had also struck the world and that Polat Yol Yapi could not mobilise their personnel and equipment in time.

“But we have been on ground, we have done bush clearing, technical works like carrying out topographic surveys and re-establishment of the bench marks which have constantly been washed away by heavy rains and we are determined to give the government of Uganda and all stakeholders along this road value for their money,” said Eng Saad.

A report accessed by PML Daily on Civil Works for upgrading of Muyembe- Nakapiripirit road [92Km] from gravel to paved [Bituminous] standard dated August 2021 says that the valuation report for the quarry has been approved by the Central Government Valuer but that it is NEMA that is yet to approve the Environment Impact Assessment [EIA] report for the contractor to start breaking the rock for use on the road.

The report reveals that equipment mobilization to meet the Programme of works stands at only 34% and that when equipment for different activities are grouped and weighed, the effective mobilization is even lower than what it is supposed to be.

The report by Polat Yol Yapi accessed by PML Daily also says although the quarry was approved in November 2020, production and the quarry is yet to commence adding that of the approved four borrow sources only one is operational due to low level of activity and moblisation at the site.

“There might also be an issue of payment of the land owners and recently the production of prefabricated culverts was delayed also due to lack of cash to pay the supplier for TB bars, subsequently this activity was also delayed for two months,” reads the report in part.

The report adds that the status of the activities like clearing and grubbing-removal of trees and stumps stands at 26.0%, Common excavation for benching at 10.9%, Roadbed preparation at 4.0%m the G7 fill for lower subgrade [First and 2nd layer] at 38.1% and that the monthly maintenance of the existing road stands at 26.7%

Eng. Samuel Muhoozi, the director Roads and Bridges development at UNRA while addressing the contractor, representatives from the Turkish embassy and stakeholders 17 August at the construction site after inspection of the road consented the project was behind schedule but asked the stakeholders to calm down.

He said the company has established a camp along the road, the consultant supervisor of the project SCET Tunisie Ltd [Tunisia] in joint venture with MBW consulting Ltd [Local firm] have already undertaken design reviews and there is some work on ground.

“We don’t want to go through discontinuing the firm and then we go through court procedures as the road works stall, let us give then another chance,” said End Muhoozi, who represented the ED Ms Allen Kagina

About the 92Km Muyembe-Nakapiripirit Road

The construction works is funded through a loan from the Islamic Development Bank to a tune of sh399.9bn that is supposed to have kicked off in 2020 and are expected to take three years up to 30 March, 2023.

The company has already been advanced Shs 60 billion to kick start the works.

The road will go through the districts of Muyembe, Kween and Nakapiripirit before connecting to Moroto-Nakapiripirit tarmac road at Nakapiripirit, this will make Karamoja sub-region to be accessed by Tarmac.

Covid-19: Strictly follow SOPs if schools, places of worship are to be reopened-RDC urges Ugandans

Police confirms Gen Lokech died from blood clot, to be buried on Friday

Police confirms Gen Lokech died from blood clot, to be buried on Friday