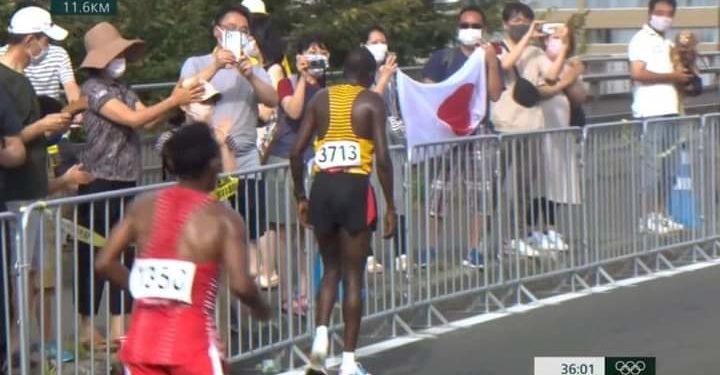 Uganda's Kiprotich did not finish the race

Kiprotich, the 2012 London Olympics gold medallist, started aggressively in the lead pack for over 5 kilometers before dropping deep into the second split group and eventually out of sight as runners reached 13 kilometers on the streets of Sapporo City in Japan.

As temperatures climbed beyond 27°C, television video showed the 32-year-old former Olympic champion limping and running as he battled to prolong his stay in the gold race.

Kipchoge, who was predicted to win, showed purpose from the start, slowly falling and recovering before throwing the farthest strides- towards gold- in the last 10km.

The 36-year-old East African is now only the third man in history to win consecutive marathon gold medals, cementing his place as probably the world’s best long distance athlete.

However, the famous athlete fell short of his world record, which he established in 2019 in Austria, when he became the first athlete to complete a marathon in under two hours, clocking in at 1:59:40.

In Sunday’s 42km race, Kiprotich’s compatriots Fred Musobo (2:18:39) and Filex Chemongesi (2:20:53) fought through the heat to finish their campaigns as the Olympic torch for Tokyo 2020, which has been postponed due to a pandemic, goes out and the flag for the following event, Paris 2024, is raised.

The race began with slightly over 100 guys from 45 different countries, according to official Summer Games records.

'We are extremely proud of you', First Lady Museveni tells Uganda Olympics team