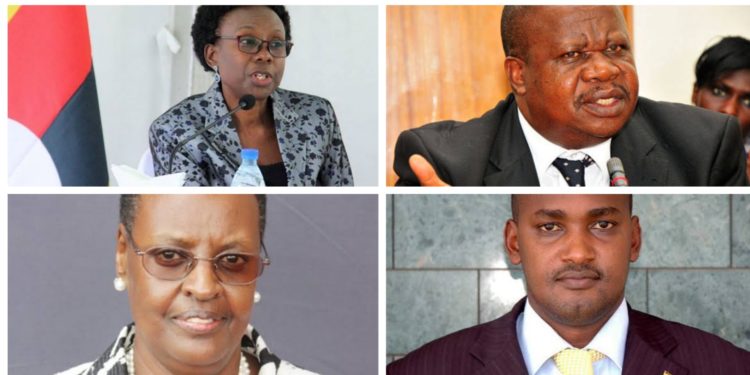 Having won his sixth successive term in the January 14 elections, President Yoweri Museveni is scheduled to be sworn in on May 12, 2021.There after, he will be expected to name his new cabinet for the next five years.

As expected, speculations over who makes it to the coveted list of new cabinet Ministers, who will be snubbed and on which specific portfolio is currently a hot topic.

Below, Watchdog’s Andrew Baba Buluba takes you through some big names that Museveni will most likely not be able to leave out while naming his team for the next government.

Formerly Minister for Karamoja and currently at the Education docket, the former Ruhama county MP has over the last ten years established herself as an integral component of Museveni’s government, besides being the First lady. As such, making it to the next cabinet would be the surest of bets for anyone.

Once at Foreign Affairs, Internal Affairs, Trade and Industry, Local Government, Justice and Constitutional Affairs, Defence, East African Community, Labour and Social Development etc, it’s like Museveni can never breath without this man. This thus tells why one would be wrong to predict he will miss out this time round.

The Minister of Works is currently seen as an epitome of power for the Central region in the current government. A General, former Police Commander and the only Muganda to have commanded the National Army, Katumba is indeed someone hard to write off.

He is the First Deputy Prime Minister and Deputy Leader of Government Business in Parliament. He has been in government since the days of former president Idi Amin Dada. After joining forces with Museveni, the veteran Army General has perennially been appointment onto Museveni’s cabinet up to date and having bounced back to the eleventh parliament, dropping him this time either sounds unlikely.

Just like Moses Ali, Gen. Jeje Odongo represents the crop of historicals mainly from outside Western Uganda in the Cabinet. Formerly an Army Commander, Odongo’s position as a Cabinet Member means a lot with regards to regional balance. Hailing from Teso Subregion where for the first time Museveni gained victory in the just concluded elections, chances he will retain a spot in the next cabinet are even clearer than ever before.

A very loyal Museveni Minister, Kasaija has ably established a rapport with the country’s CEO at Finance that thinking of dropping him would cause Museveni a headache. With Minister Kasirivu Atwoki voted out of the next parliament, the Finance Ministers who cruised through unopposed stands to symbolize representation for the people of Bunyoro where they both hail from. As such, betting he will keep a place for himself would be a fair bet.

Currently an ex-official on Cabinet, Aceng’s chances are improved by her electoral victory back home in Lira making her a member of the next parliament. Besides, her job at the Health Ministry in the pandemic days has been a commendable one. Leading the country in the fight against the killer virus disease, Aceng has miraculously delivered international recognition for which she surely deserves a reward.

The chief architect of the presidential age cap removal from the constitution, Magyezi is indeed a legend in NRM. Currently at Local Government, he was at the receiving end of all sorts of insults and ridicule from a section of the population opposed to the amendment. As a reward, a later reshuffle rewarded him and he is still backed to keep his place even this time round.

She is the Minister of Information, Communication Technology and National Guidance. Like most NRM MPs from Central Uganda, she too was washed away from Mityana District Woman MP seat by the Kyagulanyi induced political wave.

A very popular figure in Museveni’s face, Nabakooba is largely tipped to make it back in an ex official capacity.

Mbayo is the Minister, Office of the President (Presidency) and also Woman MP for Luuka District in Busoga. At the current docket, she has tremendously served well and having overcame political opposition back home, it looks certain a slot in the next cabinet is secured.

Amongi is the Minister for Kampala Capital City having previously served at lands. She joined cabinet in 2016 after a political deal between President Yoweri Museveni and Uganda People’s Congress – UPC under Jimmy Akena’s stewardship.

Akena, a son to former president Apollo Milton Obote is also husband to Ms Amongi. With the two principals on very good terms five years later, it’s is very certain that the  Minister will bounce back with utmost ease when the next cabinet reshuffle happens later this month.

The youthful politician from Kigezi is the Minister of Gender, Labour and Social Development.

Previously Minister for Kampala then ICT, Tumwebaze has since become a super Minister whom many have tipped for bigger things in NRM as party transitions from the old guard of 1986 to a new generation of leaders.