Why NWSC top bosses are under scathing attacks from faceless accusers

Her campaign was opposed by a top NRM official, worried of losing a stranglehold influence on affairs in the district. 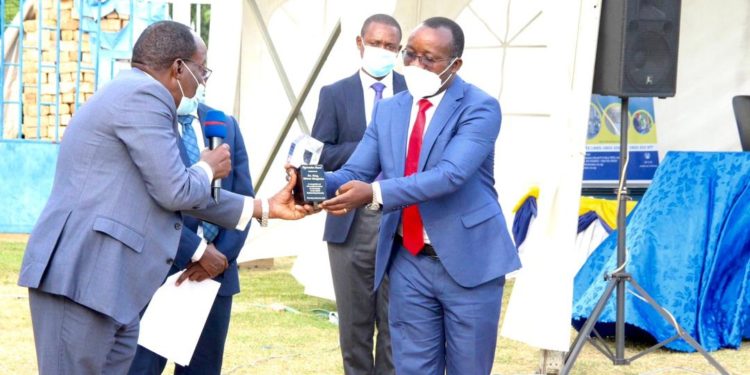 KAMPALA – The National Water & Sewerage Corporation is once again a target of a smear campaign with a regurgitated wave of allegations of impropriety at the government water utility company targeting the Managing Director Dr. Silver Mugisha.

It has now emerged that the government corporation may be a victim of its own success with strong performance returns, a headache for some specific political players who targeted Dr. Mugisha in the aftermath of the fallout in the Bushenyi district political affairs.

It is understood that some political heavyweights from Bushenyi, the traditionally political poralised district, who initially dismissed Ms Annet Mugisha’s ability to win the district woman MP seat, have since decided to target her husband to dislodge him from the NWSC Managing Director’s job.

Dr. Mugisha’s wife, Ms Annet Katusiime Mugisha is incoming Bushenyi Woman MP after she won the race on the ruling NRM ticket with a thumping percentage of the vote. Her campaign was opposed by a top NRM official, worried of losing a stranglehold influence on affairs in the district.

However, it has now emerged that political fallout from the race continues to instigate those pushing to have Dr. Mugisha clipped from the NWSC Managing Director’s chair and have combined with some elements inside the corporation unhappy with tighter controls in some departments and an upcoming restructuring of the transport and security department on the other hand.

“NWSC recently signed an MOU with the UPDF to help boost our transport and security department and despite the board approval of this arrangement, there was some resistance,” a top official said.

It is understood that under the arrangement, the Corporation will carry out maintenance works on her own fleet, a development that is expected to save a lot of funds.

“Naturally, those who have been benefitting from the outsourced function are not happy,” a source noted.

In another instance, an audit of the recruitment processes, it was found out that some cartels, working with some internal NWSC staff were issuing unauthorised job offer letters, a matter that was investigated and closed with tighter controls.

In a separate development, the NWSC after embarking on an ambitious plan of reaching more towns in Uganda and connecting more people, the top management decided to invest in ventures that only add value by getting more people connected to the grid.
“As a result, ventures that did not add value have gone unfunded and some staff, who were benefiting from these felt unhappy. Some even resigned and left,” official notes.

Coupled with the above, it has also emerged that some unhappy prospective bidders of the various infrastructure projects at the government water utility company decided to fan allegations after failing to influence the bidding processes of some projects because they have been denied meetings with top managers including the NWSC Managing Director.
Teaming with some political elements, those frustrated then have decided to instigate some staff and fan allegations of impropriety, all previously investigated by different institutions including the NWSC Board and found to be without merit, diversionary, and in most instances instigated by political interests.

Investigations indicate that most of these allegations including suggestions of impropriety in the procurement of NWSC training centres in Northern and Western Uganda, and other projects are “being sponsored to serve certain political interests”.

It is also reported that some political players have been promised huge financial support in upcoming elections in a certain sporting area in Uganda. This was on the condition that they help in incentivizing the NWSC smear project.

Top officials have since defended Dr. Mugisha against allegations of involvement in some of the mentioned projects, dismissed allegations that his private residence was constructed on the corporation’s land, and also dismissed allegations that the NWSC MD, had through the Bamugisha Community Welfare Ltd (BCWL) run by his wife and now NRM’s Bushenyi Woman MP-elect Annet Mugisha misused resources of the corporation to fund positive community initiatives to boost his wife’s political fortunes as it was discovered that there was no nexus between the corporation’s resources and funding of the NGO.

The allegations that the NWSC chief used his official mobile number to make huge private transactions off the corporation coffers have also since been dismissed as unfounded.

According to Mr. Sam Apedel, the NWSC Senior Public Relations Manager, the private mobile money transactions using a CUG number attached to the MD and publicly known were purely private, and “the practice did not violate any laws of the country”.

It was also noted that for the record, while the NWSC does get receivables through mobile money, it doesn’t pay out through the same medium.

The NWSC has also explained that the company has never gotten COVID-19 relief funds from Government as alleged as the government has only been paying water bills owed to NWSC in accordance with Corporation’s financial procedures.

According to Senior Public Relations Manager Sam Apedel, the Corporation’s Board last year received and adopted explanations in relation to all the allegations being regurgitated and the narrative targeting Dr. Mugisha’s position.

“The matters were heard to the satisfaction of the board,” Mr. Apedel said on Friday.

Dr. Mugisha, responding specifically about the politics that come with his wife’s involvement in elective politics said on Friday:

“Of course my wife is within her rights to run for a political office and I could not stop her,”.
“However, I have remained professional and I continue to focus on performing my duties in the best interests of the NWSC,” Dr. Mugisha told the media from Pader on Friday,  where he was on a performance improvement tour of the corporation’s operations in Eastern and Northern Uganda.
Dr. Mugisha says he was fully focused on working with his team to hit the institution’s targets of “securing water for all” as tasked by the Board.

The NWSC Board recently approved the Corporate Plan 2021-2023 which has given the corporation’s management a new outlook and ambitious targets including new areas of transformation to re-engineer business.