by Mubiru Ivan
in News, Politics
68 3 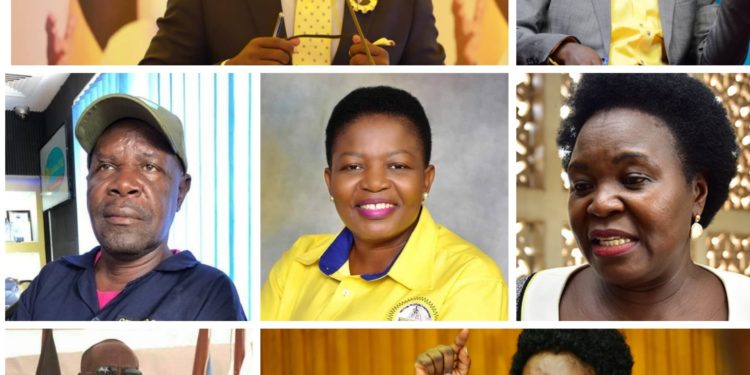 The Speaker of Parliament Rebecca Kadaga on Monday reported her enemies to President Yoweri Museveni who she accused of working around the clock to ensure that her political career ends in tears.

All this happened while in a meeting at State House Entebbe where the First Citizen was meeting Parliament Speakership and Deputy Speakership contestants due the chaotic nature of the campaigns being conducted by Kadaga and her closest competitor Jacob Oulanyah. The meeting was all about bringing sanity in the race.

Over the years, Kadaga who has been in Parliament for over three decades has fallen out with a good number of ruling party-NRM cadres whom she has always accused of fighting her. The fierce Kadaga in 2020 clashed with her boss President Museveni when the latter blasted MPs for diverting Ugandans from the war against Covid-19 by giving themselves Shs20 million each. Museveni said that it was morally and legally wrong given the fact that the country was facing a virus crisis.

Kadaga furiously fired back and warned that the Legislature is being attacked by the Executive (led by Museveni) and Judiciary, she vowed to take appropriate action. She wondered why the attack was only aimed at parliament yet the supplementary budget where the Shs.10bn was cut from was shared with other government agencies and organizations.

In the meeting, Kadaga told Museveni that Gen Saleh, the coordinator of Operation Wealth Creation (OWC) was funding people to stand against her.

She said this in reference to her recent heated race with Forum for Democratic Change’s Salaamu Musumba in Kamuli.

Kadaga won the Woman MP race but Musumba has since petitioned court to overturn the election.

Kadaga also accused Opondo of not liking her on top of abusing her whenever he gets chance.

Following Kadaga’s outcry, President Museveni was forced to telephone Gen Saleh and Ofwono to defend themselves over the allegations.

On receiving the call, Gen Saleh denied having funded anyone to stand against Kadaga.

“I know my brother has never lied to me. You(Kadaga) need to stop listening and acting on rumours from people,” Museveni said.

The President after called Opondo, asking him to defend himself on the allegations raised by Kadaga.

In response, Opondo reportedly admitted to not liking Kadaga but said this stems from the way she handles party issues. Opondo said Kadaga undermines the party.

“If it is CEC that gave her this term (as speaker), then why does she say it has no power? “ Opondo wondered.

Kadaga also pinned Kasambya County MP-elect David Kabanda whom she said was resentful of her politics. The former Personal Assistant to Foreign Affairs Minister Sam Kutesa has openly been crusading for Oulanyah and he is actually on his campaign team.

Kadaga also pointed out NRM Secretary General Kasule Lumumba, whose party Secretariat, she asserted was calling new MPs promising them lucrative committee and Cabinet deployments once they vote Oulanyah for Speakership. She demanded that Gen Museveni sanctions Lumumba for doing such.

The Speaker also accused government Chip Whip also outgoing Kiboga District Woman MP Ruth Nankabirwa of working with Gen Saleh to instigate Salaam Musumba to petition the Jinja High Court challenging her reelection as a strategy to financially and emotionally overstretch her paving way for Oulanyah. That Nankabirwa was, at the instigation of Saleh, holding meetings with Musumba and NUP’s Brenda Nabirye in Jinja to plot her political downfall.

Kadaga also complained about Godfrey Kiwanda saying the Tourism Minister was using his position as NRM-CEC Vice Chairperson Central region to portray her among MPs as undesirable while claiming she was politically past her sale-by date.

She as well complained about Buruhya County MP Margaret Muhanga whom she said was among the circle that wants to fail her politically. Muhanga is also the NRM caucus Spokesperson.