Who is Esther Kisakye, the Supreme Court Judge who clashed with her boss Owiny-Dollo over Bobi Wine case?

Currently Kisakye is the most experienced judge at the Supreme Court panel.

by Stephen Kalema
in National, News
79 1 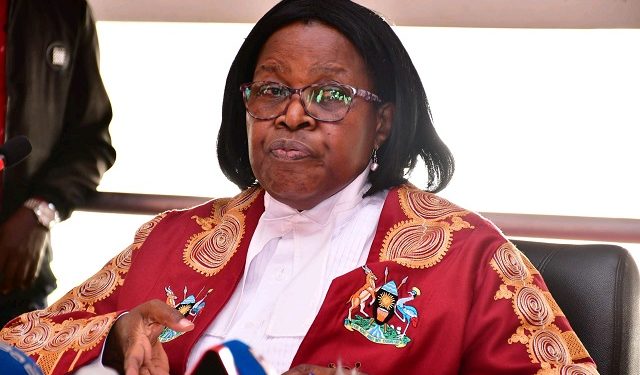 Justice Esther Kisakye, one of the 9 judges of the Supreme Court on Thursday came out to accuse her colleagues led by Chief Justice Alfonse Owiny-Dollo of confiscating her judgment.

In a dramatic incident unheard of in the Judiciary, Kisakye told reporters that the Chief Justice didn’t want her to deliver her dissenting judgment in the case in which Robert Kyagulanyi alias Bobi Wine challenged the presidential elections of January 14th.

Justice Kisakye made the remarks while sitting alone in the courtroom after the court break.
Court went into a short break before returning to complete a reading of the reasons for their rulings on several aspects of Mr. Kyagulanyi’s withdrawn petition.

Who is Justice Kisakye?

Kisakye sat for her Uganda Advanced Certificate of Education (UACE) from Trinity College Nabbingo. Later she joined Makerere University where she acquired her bachelor’s degree in law.

She then went to Law Development Center where she obtained a Diploma in Legal Practice. Justice Kisakye holds a Master of Laws from Georgetown University Law Center, in Washington, DC, in the USA.

With the help of an international fellowship from the American Association of University Women and on a scholarship grant from the Margaret McNamara Memorial Fund, she managed to acquire her degree of Doctor of Juridical Science (SJD), from the American University, also in Washington, DC, USA,

Before her appointment on Supreme Court Panel, she served as a lecturer at the Faculty of Law at Makerere University.

Supreme Court Justice, Hon. Lady Justice Dr. Kisakye for three years (2013-2016) she was the president of the National Association of Women Judges in Uganda. She once chaired the East African Judicial Committee. Justice Kisakye has been Supreme Court Judge since November 23rd, 2009 which makes her the most senior in that court.

Currently she is the most experienced judge at the Supreme Court panel.