by Stephen Kalema
in National, News
9 1 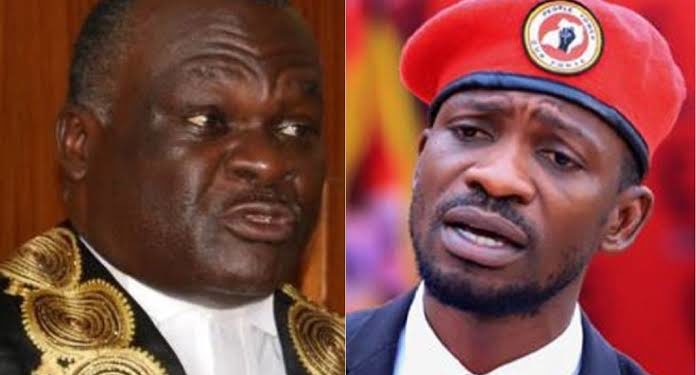 On Thursday, Justice Esther Kisakye, one of the 9 judges of the Supreme Court  came out to accuse her colleagues led by the Chief Justice of confiscating her judgement.

In a dramatic incident unheard of in the Judiciary, Kisakye told reporters that the Chief Justice didn’t want her to deliver her dissenting judgement in the case in which Robert Kyagulanyi alias Bobi Wine challenged the presidential elections of January 14th.

Justice Kisakye made the remarks while sitting alone in the courtroom after the court break.

Commenting about the incident,Bobi Wine-the National Unity Platform (NUP) leader said what Justice Owiny-Dollo did not only disgrace himself but also the Judiciary and the Office of the Chief Justice.

“Fellow citizens, this is what Gen. Museveni has turned our country into- a complete laughing stock! An institution which must be protected as much as possible is the judiciary, simply because it is the last place of refuge for citizens,” Bobi Wine said in a statement on Friday.

” Mr. Owiny Dollo ought to resign from office with immediate effect, if he still has any conscience in him. His scandalous conduct yesterday, and indeed on several other occasions during the Petition, should be condemned in the strongest terms possible. No judge who demonstrates such vile disregard for the Judicial Code of Conduct should be left to get away with it.”

The outgoing Kyadondo East legislator also commended Lady Justice Kisakye for living up to the oath she took to protect the Constitution.

” This is evidence that all is not lost. There is still hope for our country.As we all remember, judicial officers like Benedicto Kiwanuka served Uganda in the most difficult times. Some of them paid a very high price for their stand. But to date, their names are etched in the annals of history.”

STATEMENT ON THE DISGRACEFUL CONDUCT OF MR. OWINY DOLLO

Mr. Owiny-Dollo has disgraced himself, the judiciary and the office of the Chief Justice. The moral thing for him to do is to resign.

Yesterday morning, the Supreme Court of Uganda convened to give detailed reasons for blocking me from amending the Petition I filed against Mr. Museveni’s purported election as President; and for blocking me from filing additional evidence against him. You may recall that it is these unfair incidents that eventually compelled me to withdraw the Petition.

Led by Chief Justice Alphonce Owiny Dollo, the judges arrived in Court more than 1 hour late at about 10:40AM. Suffice to note that on each of the occasions when Court held proceedings in the Petition, the Judges always arrived more than 1 hour late and yet Mr. Dollo still saw no irony in rejecting our evidence on grounds that it had been ‘filed late’.

After Justices Ruby Apio Oweri, Paul Mugambe and Ezekiel Muhanguzi had finished reading their decision, the Chief Justice adjourned Court for what was supposed to be a short break. He announced that they would reconvene at 01:30pm for Lady Justice Esther Kisakye Kitimbo to deliver her judgement, in which she disagreed mostly with the unfortunate conduct of the Chief Justice!

By 01:30PM, my lawyers were already at Court waiting for the proceedings to resume but the judges were nowhere to be seen. At about 02:00PM, lawyers led by the Attorney General Mr. William Byaruhanga were called for a private meeting with the Chief Justice. What they discussed is unclear, but the subsequent events perhaps reveal some of it.

At about 02:30PM, Justice Esther Kisakye returned to Court alone with a few bodyguards. No sooner had she sat down than the Attorney General and lawyers representing Mr. Museveni also walked back into Court. They then removed their professional gowns, gathered their files, and marched out of Court as the Judge looked on in silence.

To relieve the tension, Justice Kisakye briefly addressed my lawyers and informed them that the Chief Justice had confiscated the file that contained her dissenting ruling. She thereafter went to his chambers to retrieve the file, only to return 20 minutes later to find that lights and microphones in the dimly-lit tent (turned into the courtroom) had been switched off. She then addressed my lawyers again and stated that;

“This is a rare circumstance where I deliver my ruling without Court officials including the Registrar of Court and the Clerk who usually calls the file. My file has been confiscated by the Chief Justice of Uganda to gag me by denying me the opportunity to read my dissenting ruling. Nevertheless I am working from a duplicate copy. The reason he gave was that I had not circulated my Ruling to ‘them’ to ‘vet’. There is no law in Uganda that requires me to do so. It is surprising that the Chief Justice has chosen to use barbaric means, and to use his powers in the manner that he has chosen. The Chief Justice had directed that my Ruling would be read at a later date that he would set after he had ‘vetted’ the Ruling. I found that order unconstitutional and chose to disobey it. When I was appointed a Judge of this Court in 2009, I swore to uphold the Constitution of Uganda and I also took the Judicial Oath and I am acting based on those undertakings I made. I felt it my constitutional duty to disobey the unlawful orders of the Chief Justice and fulfill my duty as a member of this Coram to deliver my decision within the 45 days required under the Constitution.”

In the Ruling she subsequently read, Justice Kisakye demonstrated that her colleagues had acted unfairly when they blocked my intended amendment and affidavits for being ‘late’ yet in other cases they always issue new timelines for litigants who miss their deadlines. She exposed the hypocrisy of the Attorney General and Mr. Museveni’s lawyers who argued that the eleven days I spent under house arrest did not disadvantage me, but that the one extra day I sought to file more affidavits would disadvantage them. She disagreed with her colleagues on concluding that I had NOT been blocked from collecting evidence for the Petition yet I had proven that my phone signals were disabled, internet switched off, my witnesses abducted, and my lawyers had to work in hiding.

Justice Kisakye’s Ruling painted in graphic detail the true picture of the incapacitating conditions to which Mr. Museveni subjected me and my lawyers and witnesses to disable us from prosecuting the Petition. It is those conditions, which Mr. Owiny Dollo did everything possible to downplay, that ultimately compelled me to withdraw from Court. His conduct validated feelings shared by majority of ordinary citizens that the Court was paying allegiance to Mr. Museveni but not to the Constitution or to the People of Uganda.

Friends, you may recall that the leader of the Uganda Law Society recently published a statement condemning my lawyers and me for what it claimed to be indecorous conduct towards the Court. This was in response to concerns I had shared with the public about the biased manner in which the Court was handling my Petition. Several other public individuals and entities have voiced, in choreographed fashion, similar criticism. At all times, they conveniently justified and blamed on us the unfair treatment we were receiving from the Supreme Court. Not once did they acknowledge the obvious merit in our complaints against Mr. Owiny Dollo who heads the Court. I am glad that we have now been vindicated. I am sure the vast majority of the members of the Uganda Law Society are equally appalled at the conduct of Mr. Owiny-Dollo who has dragged to the gutters the image of the judiciary. The Law Society must never again seek to defend courts of law just for the sake of it. It must rise to the occasion and defend the integrity of the judiciary at whatever cost!

Whereas Justice Kisakye indicated yesterday that she would deliver another ruling today morning in an application that another litigant filed seeking for the Chief Justice’s recusal from hearing my Petition, I have learnt that the litigant and journalists who had turned up for the ruling today were blocked from entering the Court.

Fellow citizens, this is what Gen. Museveni has turned our country into- a complete laughing stock! An institution which must be protected as much as possible is the judiciary, simply because it is the last place of refuge for citizens.

Mr. Owiny Dollo ought to resign from office with immediate effect, if he still has any conscience in him. His scandalous conduct yesterday, and indeed on several other occasions during the Petition, should be condemned in the strongest terms possible. No judge who demonstrates such vile disregard for the Judicial Code of Conduct should be left to get away with it.

I salute the Hon. Lady Justice Esther Kisakye for living up to the Oath she took to protect our Constitution. This is evidence that all is not lost. There is still hope for our country.

As we all remember, judicial officers like Benedicto Kiwanuka served Uganda in the most difficult times. Some of them paid a very high price for their stand. But to date, their names are etched in the annals of history.