by watchdog
in News, Politics
4 1 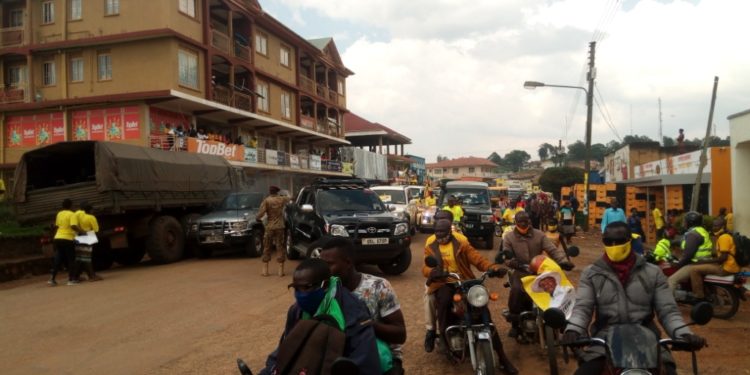 The National Resistance Movement (NRM) party Presidential candidate, Gen. Yoweri Museveni has been massively welcomed in Rukungiri town as he seeks support for another term of office.

Gen. Yoweri Museveni who doubles as the president of Uganda and the national resistance movement party chairperson entered in Rukungiri town at 3:00pm in a tight security up to the district main stadium where he addressed the party delegates, flag bearers from the two districts of Rukungiri and Kanungu.

All roads entering Rukungiri town were full of people who were standing alongside roads showing NRM sign and dressed yellow though the president did not wave for them but remained in his car.

Only those that presented Covid-19 free certificates were allowed to enter the campaigning venue and thousands denied access to the stadium.

However this action seriously hearted party supporters some saying they wouldn’t have come to see him.

Jolly Muhooza , an NRM supporter and lc2 chairperson Kitimba parish in Western division Rukungiri municipality, said that she left her home early in the morning hoping to see the president but it was her disappointment that she was denied a chance to see him. Muhooza threatened not to appear again at any campaigning rally for the president.

Brain Gumisiriza, an NRM supporter from Kanungu district said that he was patiently waited for the president but he disappointed by his security men who him a chance to the president saying that he paid shs.30, 000 for transport from his home.

“Returning with him will heart me seriously because I really wanted to hear his message since he has been power for a long time”. Gumisiriza said.

Stephen Mugisha, a business man in Rukungiri town said that he closed his business in the morning to see the business but so shocking he was denied access to the campaigning venue saying that they would have at least those with masks to enter the stadium and her the president’s message.

Bernad Musinguzi, an NRM supporter from Bwambara sub- County in Rukungiri district said that by 7:00am he was already town waiting for the president. Musinguzi added that at least the president would have waved back to them since they were waving at him.

Museveni’s campaign visit to Rukungiri district was a unique one compared to those of his fellow presidential candidates since theirs whoever would come was allowed to access the campaigning venue.