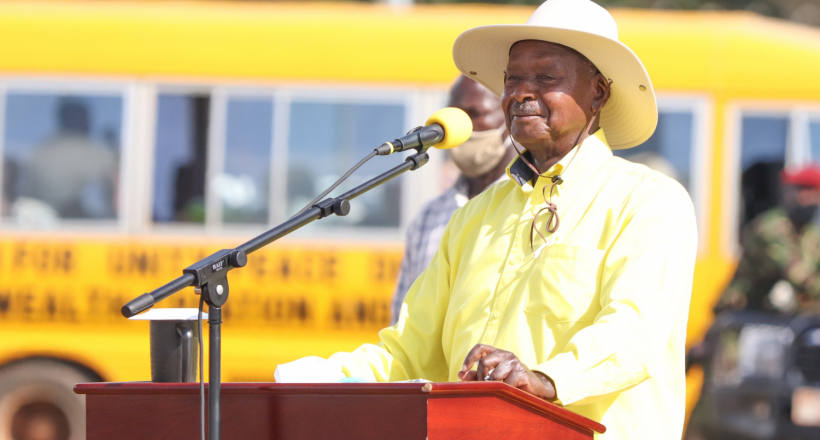 President Yoweri Museveni, who is also the NRM presidential flag bearer has asked the party leaders to preach the gospel of East African integration to Ugandans. Museveni made the remarks on Tuesday as he addressed NRM leaders and party flag bearers from Busia at Madibira Primary School grounds in Busia Municipality. “The NRM leaders should preach the gospel of East African integration because we need East African and Africa at large as markets for our goods,”Museveni said.

The President explained that as the country continues to develop, more goods are produced but noted there is not enough market for all that is produced.

The NRM presidential candidate cited an example of China which has a population of 1.4 billion people but said is still looking for markets in other countries, a strategy he said should be emulated by Ugandans.

“Sugar, milk, maize are all in plenty. The industries are also producing many goods but unfortunately, the local market is no longer enough.

The more we wake up is the more we will realize that we need East Africa and Africa,” Mr Museveni, a longtime advocate for regional integration said.

“We need to be closer to our brothers from Kenya, Tanzania, Rwanda, DRC and Sudan so that we talk to them to open their borders so that goods can move freely. Whoever produces something good can easily sell in each other country’s market. “

According to the NRM presidential flag bearer, having market for our goods will mean jobs for Ugandan producers.

The President urged the NRM leaders to advocate for the East African integration as one of the sure ways to ensure not only unity in the region but also ready markets for each country’s goods.

Uganda has over the last 30 years grown its balance of trade with Kenya. In 2018, Uganda for the first time in economic history exported more goods to Kenya than any other country in the East African region. Uganda has for long had a sizeable trade deficit with Kenya, at one time hitting the Shs500 billion mark. However in the five years running to 2018, the country decreased this deficit with East Africa’s largest economy.

For decades, Uganda has been the biggest consumer of Kenyan goods. But thanks to import substitution resulting from the factories springing up in and around Kampala which saw a major cut in goods coming in from Nairobi, this rate has decreased marginally in recent years.

According to the Central Bank of Kenya, Uganda exported goods worth Shs1.1 trillion (Ksh30.21b) compared with imports of Shs965b (Ksh26.08b), resulting in a trade deficit of Shs153b (Ksh4.13b) in the period under review.

Ugandas exports to Kenya in the period running between January and September 2018 stood at Shs1.5 trillion compared to Shs908.7bn in 2017. In comparison to other neighbours in the region, records show that Uganda exported goods worth Shs1.5 trillion to Kenya compared to Tanzania and Rwandas Shs820b and Shs499b respectively.

The NRM presidential candidate on Tuesday carried out a series of activities in the Bukedi sub-region which included opening of the Busia Main market and the commissioning of the Bumbobi- Lwakhakha road.

Launch scanner tool model 2020: A mobile digitised machine already in Uganda to diagnose all your car problems with ease