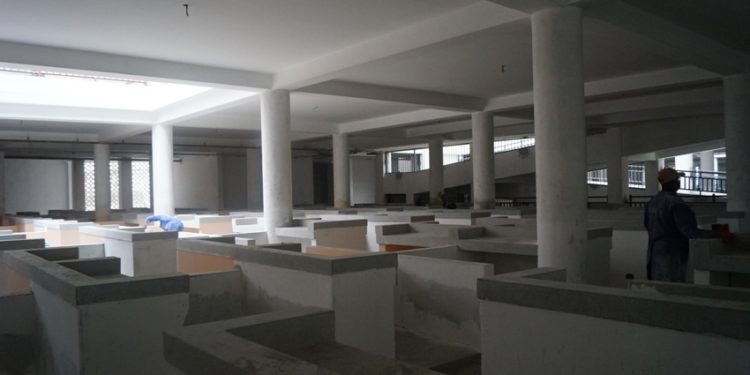 With construction works in Arua Main Market near completion, the newly created city has a new look.

Dott Services, the contractor, has put in standard works into this project, whose estimates state it will offer over 4,600 businesses a home.

Dott services in partnership with Sadeem al-kuwait, are in the last stages of completion to this near future work hub for hundreds of people.

Dott services was given a contract by the Uganda government to build this state of art structure, which has three levels and two joint buildings.

The Project Quality Control Surveyor, Hudson Mayombwe explains that the project which kicked off on 19 February, 2018, is expected to cost Shs40 billion on completion.

Mr Mayombwe says that the market is to serve areas of modern day DR Congo, as well as Maracha and Arua districts.

“The construction works are at 90 per cent with only a few construction works left to have the market into operation. The market will facilitate inter-community and inter-state trade and it will enable at least 4,600 businesses to flourish in the west Nile region of Arua,” he said during a media tour this week.

“The main building and market have enhanced futures for example: Four emergency exits incase of any fire, an underground water tank that is filled with rain water, there is a daycare center for women with infants, toilets for the disabled people and a floor run on solar to increase light inside the ground floor of the building. The market will be able to accommodate many types of businesses for example: Fish stalls, clothing and Textiles, boutiques and fabrics, poultry sellers, restaurants, beauty parlors and food vendors like matooke, Irish among others.”

Mayombwe also said the market is built with eco-stoves designed to regulate smoke in and out of the buildings.
as well as eco-friendly stoves in the kitchens of restaurants.

“A few things caused the delay in construction for example the construction of Duka road, which is adjacent to the market. Too much rainfall which has been happening for the past three months in Arua has also caused a slowdown in operations, pumping out water from the partially constructed underground tank to be used as a water reservoir has also been a major problem because of the intense rains currently pouring in the area,” he noted.

Meanwhile, Dott services also partnered with National Water and Sewerage Corporation to work on project which is estimated to be worth Shs66 billion. The project comprises of both water and sewerage treatment areas gazetted away from Arua but in flat lands together with a large built water reservoir tank in Giri Giri in the suburbs of the city.

Sowed Kibuuka, a site surveyor and supervisor said the sewerage treatment at Dadamu has underground pipes that channel sewerage to the plant with consists of a cesspool, screening chambers, anaerobic ponds and a river system (River Enyaru).

“Sewerage is channeled from the cesspool to the screening chambers to remove solid wastes, condoms and maybe polythene material that is pumped in with the wastes. Then this liquid sewerage is put in an aeration room for bacterial action and reduce the smell of the sewerage as part of the treatment. It is then sent to an anaerobic pond for oxygenation and continuous action from the bacteria and then finally in the aerobic pond it is oxygenated and finally channeled back into the river, which feeds the water back to Arua and serves streams and communities around Arua,” Mr Kibuuka said.

“At this point in Arua town there is a process called water aeration at the national water and sewerage co-operation premises. The plant was constructed in 2015 and officially handed over in 2018. At this place, water is pumped from the river (Enyaru) to the NWSC plant, which comprises of a segmentation tank, gravity filter system and a chlorination plant.”

Mr Kibuuka further disclosed that when water is pumped from the river, it goes through an aeration chamber to a chamber to screen out any objects from it that could not be necessary. This could also include the watercolor being transformed the state of being muddy and milky. From this stage, it is forced up to segmentation for continuous removal of unidentified solid and other materials. From here, the water goes through a gravity filter system just before the final stage, which is chlorination to check if it is good and clean for human use.

“From here, the water is pumped out to water tanks and reservoirs in the district for use and its estimated that this plant produces 350 cubic liters/one million liters of water daily for use in Arua.

“On continuation from water treatment now people of Arua will have access to clean water with a boost of up to 3.5 million liters of water storage facility. This is expected to create better livelihood and health conditions around Arua and also create a state of water security in the border city.”