by Stephen Kalema
in National, News
36 0 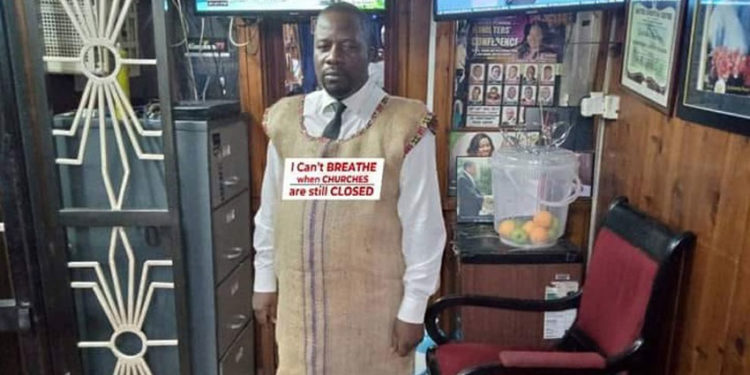 Bishop David Livingstone Kiganda of Christianity Focus Centre Church Mengo Kisenyi has vowed to start wearing a sackcloth with effect from 9th July 2020 if government fails to lift a suspension on churches.

Pr. Kiganda on Tuesday said that he will put on the attire made out of sacks as a way of expressing the unfair treatment against places of worship by government.

Due to the outbreak of the Covid-19 in Uganda in March this year, President Yoweri Museveni under the guidance of health experts suspended mass gatherings to limit the spread of the pandemic in the country.

“Once we deal with the concentrations in the Educational Institutions, the next concentrations that we must deal with are the religious gatherings: prayers in Churches, in Mosques, open-air prayers, and services on Fridays, Saturdays, and Sundays. In the interests of our people’s health, these should be suspended for a month with immediate effect. How would God forgive us and how would we forgive ourselves?” When it comes to health, it is better to be a coward and be on the side of caution. If there is no danger after one month, that will be good,” the President said in his state of the nation address in March.

However, according to Bishop Kiganda, the current situation in the city centre Kampala and other suburbs shows no sign of respecting Ministry of Health Measures, even out of 10 people moving in the city only one has a face mask.

Drawing his inspiration from the biblical book of Esther where sackcloth was used as a symbol of debasement, mourning, and repentance, Kiganda said that the constant closure of the church is a sign that the nation does not put its trust in God, or credit Him for the past accomplishments in the Covid-19 fight.

“Esther 4:1 describes Mordecai tearing his clothes, putting on sackcloth and ashes, and walking out into the city “wailing loudly and bitterly.” This was his reaction to King Xerxes’ declaration giving Haman authority to destroy the Jews (see Esther 3:8–15).

“No one should be surprised when you will see us in this new type of attire while praying and lamenting for our nation and its leadership and asking God to forgive us for comparing him to a mere virus,” said Kiganda.

Kiganda’s protest comes at a time when Uganda’s covid-19 cases are about to hit 1000 mark. Currently, the country has 953 confirmed cases.