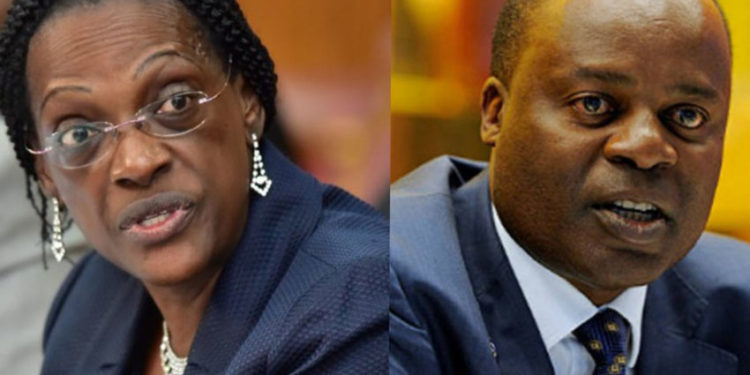 On 20th February 2020, Kakuru a concerned Ugandan was seeking the High Court Division of Anti-Corruption to institute an investigation into the operations of former BoU Deputy Governor Louis Kasekende, former Director of Commercial Supervision, Justine Bagyenda. and Assistant Director at Bank of Uganda Benedict Ssekabira while they were still in office.

In his petition, Kakuru wanted the court to question the three and their intent to establish their role into the illegal sale of defunct Crane Bank valued at Shs1.3 trillion and handed over to Dfcu at only Shs200bn, not in cash. Six other banks were also victims of the above individuals’ heinous dealings.

He also wanted the Anti-Corruption Court to base its investigations on the 2019 findings of the Committee on the Commission, State Authorities and Statutory Enterprises (COSASE) and the Auditor General’s Report, which implicated Kasekende, Bagyenda, Ssekabira and other officials at the Central bank in having had a hand in the dubious sale of Crane Bank and several other commercial banks.

“The loan portfolio sold included secured loans of Shs34.5 billion which had a valid, legal or equitable mortgage on the real property and were supported with legal documentation. I noted that the contract price of Shs8.878 billion represented 26% of the total secured loan and 7 per cent of the total loan portfolio implying that the loans were sold at a discount.” The Auditor Genera; John Muwanga say in his special audit report of BoU on defunct banks (Annex 3).”

However, in the document seen by this website the court in question refused to take on the requests by the petitioner and asked him to push his petition to the office of DPP, IGG and State House Anti Corruption Unit

One of the reasons why Justice Gidudu refused to take on Kakuru’s petition is that the Anti-Corruption Court being a Court of Criminal cases does not receive petition but receives charge sheets and indictments preferred by the PPD or IGG for the prosecution of cases which have been investigated by either the police or IGG.

“The Anti-Corruption Court does not direct the Police to investigate and or to prosecute suspects in criminal cases. That is the mandate of the Office of the Director of Public Prosecutions (DPP) and Inspector General of Government (IGG) Also, the Anti-Corruption Division of the High Court is a neutral forum for adjudicating corruption and corruption-related cases. As such we don’t interest ourselves in corruption scandals wherever they may be because of our neutral status,” said Justice Gidudu.

Justice Gidudu also clarified to Kakuru to take his petition and the supporting documents to the offices prescribed constitutionally to handle them.

Kabuleta: I absolutely have no doubt that I will be Uganda's next President