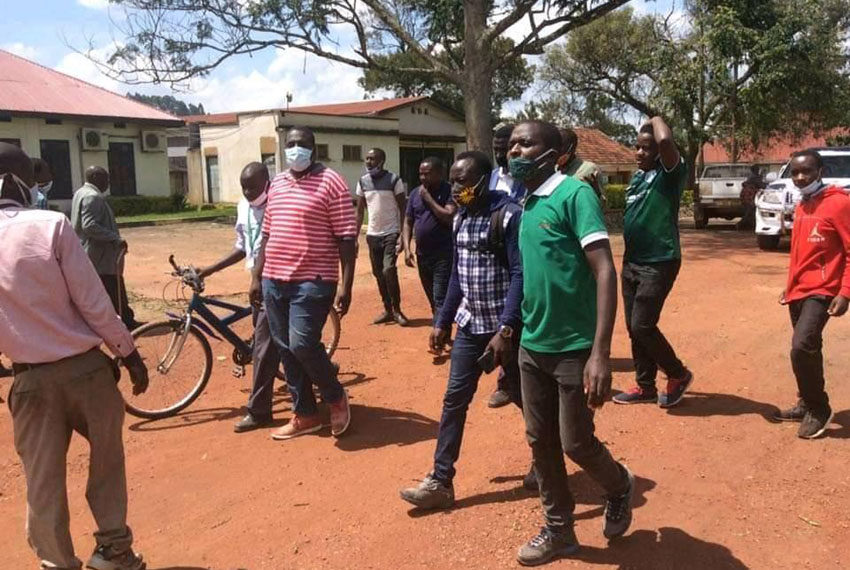 Journalists operating from Kabale District on Thursday afternoon stormed the office of the Resident district commission Darius Nandinda to protest his persistent attacks against the fourth estate.

This came after RDC Nandinda confiscated a phone belonging to Richard Akandwanaho, a reporter attached to Voice of Kigezi FM Kabale. Akandwanaho was allegedly taking pictures when Nandinda was intercepting vehicles in Kabale town over Covid-19 lockdown directives.

But in response to what they called continuous harassment, threats and assaults directed towards the media, the journalists in Kabale stormed Nandinda’s office and demanded their rights to perform their jobs be respected.

“It’s shameful and painful for the whole RDC who would instead be cooperating with the media, because I believe we are stakeholders in this country. That’s why the president recently categorized us as essential workers in his fight against Covid-19. Nandinda has been harassing the press for quite a long time.” Said job Namanya Apuuli, a reporter attached to New Vision in Kabale.

Namanya said they had opted to move to his office to dialogue with the RDC, but Nandinda was not willing to cooperate.

“We thought we could meet today and resolve everything that has been going wrong between us. But to our selves, he wanted to disarm the more. He commanded us to put our phones on his table, which we rejected” Namanya said.

The journalists further accused Nandinda for continued harassment because of what they deemed as biased reporting against them.

“You can’t find me taking a picture in a public place, when you are impounding vehicles and you threaten to arrest me and take mp phone. May be what you’re doing is illegal you don’t want people to know what is happening. We are journalists, we report what is happening” We want the RDC to know that we aren’t casual laborers Uziah Tusasire, a reporter attached to TV West said.

The journalists accused the RDC of failing to act according law on several occasions while executing duties in the district as the representative of the president.

“We believe that before being appointed as the RDC, your actions should be redisplaying actions of the president especially in handling issues concerning conflicts.

‘If you find the whole RDC failing to handle the conflict he has caused himself, it means that even people who visit his office for assistance have problems. As journalists, what he did was wrong and if our colleague had wronged him, he would have taken legal procedures” Anthony Kushaba, managing Editor at Africa Pearl News said.

In Uganda, press freedom is guaranteed by the country’s constitution which was signed in 1995.

Additionally, the African commission on Human and People’s rights in its 32nd Ordinary Session meeting on 17th to 23rd October 2002 adopted the Declaration of Principles of Freedom of expression in Africa.

According to the Declaration, freedom of expression is an individual right, cornerstone of democracy and a means of ensuring respect for all human rights and freedoms.