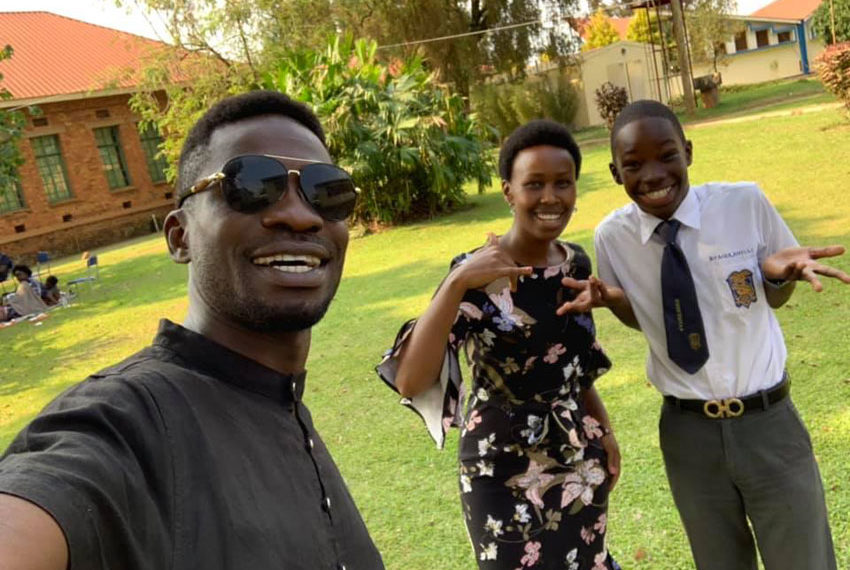 Kyadondo East MP Robert Kyagulanyi Sentamu has been criticised for “pretending” to fight corruption yet he reportedly bribed administrators at St Mary’s College Kisubi (SMACK) to make them admit his son Solomon Kampala who scored aggregate 12 in his Primary Living Examinations (PLE) and would ordinarily not have been admitted to the school had he been a son of a poor Ugandan. SMACK’s cut off points for  primary Seven candidates is usually 4, 5 or 6 aggregate.

It all started when Bobi Wine, the leader of People Power pressure group, expressed his disgust on the reports that Foreign Affairs Minister Sam Kutesa had allowed tycoon Ben Kavuya to repatriate members of his family from the United States to Uganda even when President Yoweri Museveni banned all travel to and from outside Uganda except for cargo.

According to Rule number Two of the Public Health (Prohibition of Entry into Uganda) Order, 2020 issued on 21st March, 2020, Museveni prohibited entry of any person into the country except for UN staff or property and any humanitarian organisation that seeks to enter into Uganda, and any vehicle or aircraft used for the conveyance of cargo into Uganda through any border post.

On 13th May, Kutesa wrote to the Manager of Ethiopian Airlines authorizing the trio’s travel on 18th May.

According to another letter signed by Dr Henry Mwebesa, the Director General of Health Services, Ministry of Health even went ahead to inspect a place suggested by tycoon Kavuya for the quarantine of his three family members in his letter to the Ministry dated 11th May. The three who are Kavuya’s wife, daughter and grandson will be quarantined at Legacy Courts, Plot Four, Younger Avenue in Bugolobi, Kampala.

When these letters leaked online, some Ugandans started questioning whether it was fair for government to allow the tycoon to have his relatives brought back to the country yet calls to evacuate Ugandans stuck abroad have fallen on deaf ears. One of those who expressed disappointment was Bobi Wine.

“Many Ugandans stuck abroad are suffering. “THE AIRPORT IS CLOSED” they’re told. Our request to airlift those in China was rejected! Yet, those who think they own our country have continued to fly in with relatives and cronies! We must fight on until we’re all EQUAL in this country!” Bobi Wine wrote.

However, the singer-turned-politician was reminded of the claim that his son Solomon Kampala had not qualified for admission to join St Mary’s College Kisubi (SMACK) but his family had reportedly used influence and money to ensure he joins the school, one of the best in the country.

“Meanwhile your son managed to make it to SMACK with aggregate 12,” responded a one Mugisha, who uses First Son Muhoozi Kainerugaba’s image as his profile picture.

“What I’ve picked from this saga is that a person would do the impossible to help their family. Bobi Wine’s 12 aggregated son went to SMACK and the rich man also tried to get his family here. For both intentions are good, resources are there. What society thinks didn’t matter to them,” argued a one Arthur Didan.

Others wondered why people expected Bobi to be an angel yet he was fighting hard to kick corruption out of the country.

“Bobi Wine is trying to find equality for the poor but the poor come out with lame excuses like 12 aggregates that took the son to SMACK. Abavu mulina etondo,” wrote a one Humphrey.

Meanwhile, government spokesperson Ofwono Opondo clarified that more nine people would return home aboard the same flight but claimed some people had intentionally removed these nine from the list to make it look like government was favouring the tycoon and had forgotten about others stranded abroad.

“When an opportunity presented itself and an Ethiopian Airline flight is coming to Uganda, we requested the airline to bring the Ugandans who are stranded in Addis Ababa. On that Ethiopian Airlines plane will be other nine Ugandans. It is an organized process to return them. Only weeks ago, they demanded government repatriates Ugandans stranded abroad. Today, they condemn Minister Sam Kutesa,” wrote Ofwono Opondo.

Prepared or not, learning has gone online.