by watchdog
in National, News
12 1 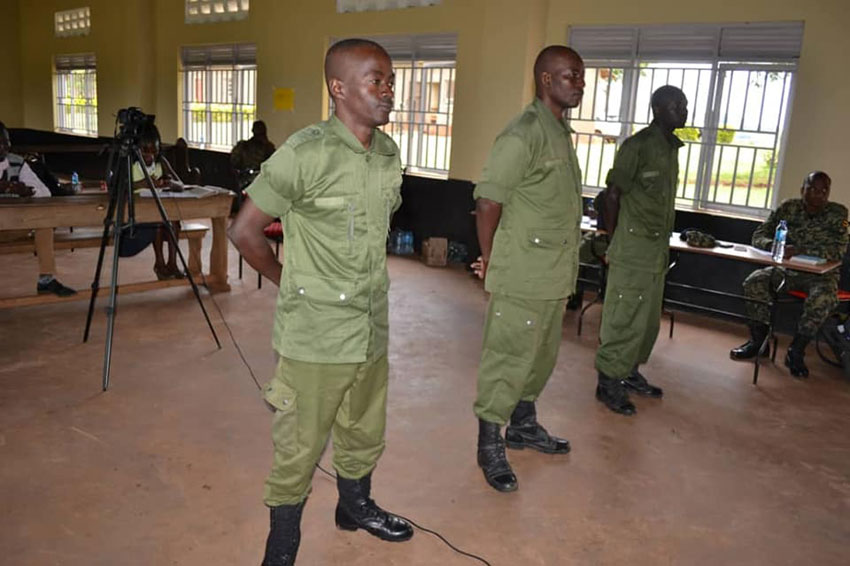 Amongst those who appeared before a five member court team under the chairmanship of Col Sam Mugyenyi, were seven LDUs who were accused of beating Wanainchi during the enforcement of presidential directives on COVID-19.

Through the prosecutor, Capt Katigan Mugisha Court heard that AX 012213, LDU Bango Godfrey, AX 014257 LDU Lumansi Paul, AX 016445 LDU Onyango Boaz, all of Kampala central battalion and LDUs, AX 014882 Mulenzi Emmanuel,AX 015432 Niyagaba Benson and AX 34137 Okolongo Grievance of Kawempe battalion, while in Kampala and Kawempe divisions beat up civilians on the 26th and 30th march 2020 respectively. This went against the laws of Uganda under section 119 of the penal code act.

All the 6 accused pleaded guilty and were convicted on their own plea. The defense counsel Mrs Kensime Merian mitigated and prayed for a lighter sentence on ground that, common assault (charge against them) was misdemeanor, the accused were first offenders, did not waste court’s time, were repentant and remorseful, and had families to fend for.

On his part, the court prosecutor submitted that, the actions of the six accused went against the established UPDF code of conduct which portrayed UPDF as a brutal force. He therefore prayed for an appropriate sentence against the accused.

After deliberations, court sentenced the six accused to 2 months detention.

The seventh LDU Mulaalo Rashid was charged on two counts, desertion and common assault. He was convicted on the second count and sentenced to 6 months imprisonment. Court could not hear the first charge, since hearing of a capital offence required the presence of the 7 member quorum.

Court also heard charges against civilian Atuzarirwe Emmanuel who was found wearing a UPDF plain uniform contrary to section 164 of the UPDF act. He was convicted on, his own plea and sentenced to two years imprisonment.

L/Cpl Okwi Emmanuel of Kawempe battallion was charged with failure to execute one’s duty contrary to the UPDF act. His case could not be heard by a five member court since its capital in nature.

Twenty two Military Police Drivers on Thursday completed a two months course in defensive driving and riding. The course was...

Although Mukono municipality lawmaker, Betty Nambooze, has been inaugurated as a member of National Unity Platform (NUP) on Thursday morning,...

BOU probe: Cosase sends out central bank officials due to lack of preparation