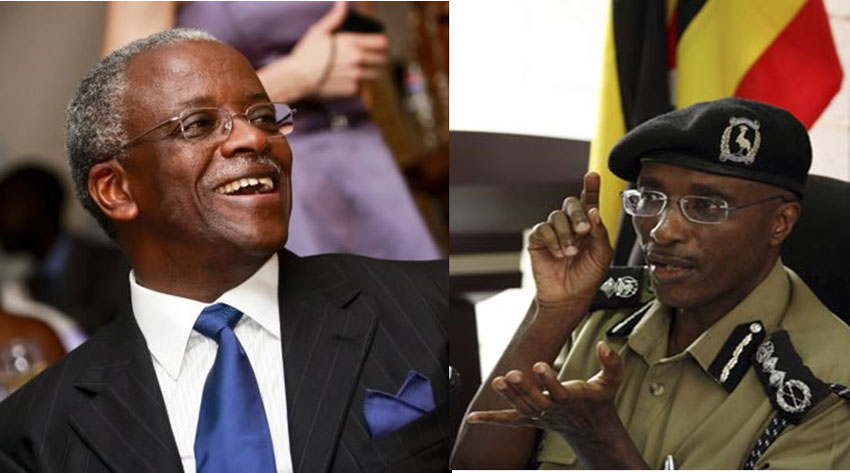 Following a wide range of panic measures to contain the unrelenting opposition that seems to outgrow the available tactical capacity each and every other day, President Yoweri Museveni has reportedly made up his mind to recall two of his most efficient cadres – John Patrick Amama Mbabazi and former Police chief Gen. Edward Kale Kayihura Karekyezi, to help fix the Robert Kyagulanyi (Bobi Wine) political mess.

Although the anticipated return for Gen Kayihura is not something that could have been seen coming by many, Mbabazi’s return is something that would not be making news to many since pointers towards the same have been much visible in the last one year or so.

The first time a possible reunion between the former Presidential aspirant and his long time political partner became apparent to the public when he hosted the South African first family at the give a way of his (Mbabazi) daughter in marriage in 2018.

At the function which many had naturally anticipated would me marvelous, one thing had escaped the wisdom of all the fore tellers as no one anticipated that President Museveni would be among those in attendance. His presence however set the ground for media speculations that the two could have been in back door negotiations for reconciliation, something that has to a larger extent proved to be true.

The reports gained a remarkable degree of credibility some months later when Mbabazi’s meeting with his former bush war boss Gen Museveni went public for the first time since their bitter split about 4 years ago. The photo moment and the exchange of the usual khaki envelopes between the two sent wild jubilations, mainly among the NRM loyalists who termed the gesture as a pointer towards the return their prodigal son.

Government Chief Whip and also Chairperson of the NRM parliamentary caucus Ruth Nankabirwa, while commenting on the matter laughed at her Party’s enemies that had celebrated the split, saying that owing to the friendship the two Statesmen have enjoyed over the past four decades, Permanent enmity was but just a dream. She went a head to say that the former Premier was always destined to come back to the party since he had consistently refused confirming he had left NRM despite provocation from the media on a number of times.

Besides, at 71 years, Mbabazi was not in anyway going to get new friends like the ones he had left back in NRM according to Nankabirwa.

The invitation and subsequent attendance of JPAM at the NRM’s Namboole delegates conference on January 25 this year sent all speculations about his maiden return to bed as it dignified that the long awaited hour had finally arrived. It meant that Museveni had yet again pulled another of his usual political master strokes that had in the past seen some notables like Former VP Gilbert Bukenya, Late Eriya Kategaya make surprising U turns after shockingly breaking up from the establishment to join the opposition.

On February 6 this year, Mbabazi sent the clearest signal during the UPDF’s Tarahe sita annual celebrations as he received a standing ovation from the greatest among the men in uniform with General Salim Saleh, Museveni’s younger brother notably saluting the regime historical before others, including members of the current cabinet following suit.

The vacuum left by Mbabazi’s defection in 2015 was with no doubt a big miss for Museveni and the NRM party, no wonder, it has taken much effort from the party chairman to have him come back.

A Museveni ally since their days in the liberation war in the Luwero jungles, Mbabazi was credited for his mastery in mobilisation and foreign diplomacy, which were his two major preoccupations during the struggle.

When they finally captured power, Mbabazi went on to be a notable contributor towards the Country’s much needed return to political normalcy after two decades of ugly political turmoils since Milton Obote ousted King Edward Mutesa in 1966.

He went on to become Museveni’s most dependable ally, serving in almost all the most important cabinet Ministerial dockets until the two parted ways in 2015 when he occupied two very important offices – Prime Minister and Party Secretary General for the ruling NRM party.

Kayihura on the other hand is credited for consolidating the Museveni administration single handedly for nearly two decades.

By the time of his appointment to the office of Inspector General of Police in 2005, Museveni was faced with unprecedented opposition to his rule with the surprise rise of Former ally Col Dr Kizza Besigye to political stardom. Besigye had come with a new brand of politics premised on civil disobedience unlike Paul Kawanga Ssemwogerere’s board room politics which Museveni had successfully mapped out ways of keeping under check over the years.

With politically driven riots and demonstrations on the streets of the Country’s Capital, Museveni’s rule was with no doubt headed for a dead end. The situation was made worse with the defection of his strong allies such as Amanya Mushega, Augustine Ruzindana, former CDF Gregory Mugisha Muntu among others.

Kayihura however changed things with his selfless service to his master which resultantly cost him his name as the use of a combination of ruthless strategies gave opposition activists a decade to fight with him at the helm of the UPF. This deservedly earned Kayihura a place on the list of the ICC’s wanted men over violation of human rights.

When he was finally relieved of his duties in March 2018, scores of politicians mainly from the country’s opposition came out in numerous numbers to celebrate the fall of a man under whose grip they had suffered innumerable embarrassment in the name of keeping loyal to his master, the President of Uganda.

Dr Besigye in particular lashed out at the fallen General for using his office to ruthlessly persecute his fellow country men and women as though he thought Uganda would end with him.

” Kayihura should use this experience to get himself clean from the curses upon his life from the victim of his ruthless police reign among whom include the spirits of many Ugandans who lost lives at his hand,” Besigye lamented after the fall of Kayihura in March 2018.

Besigye’s remarks were very much understandable, following his nearly two decades long experience of unprecedented repression from the President’s keeper, surviving death on many occasions, notably when he sustained a broken arm at the hand of police officer Gilbert Arinaitwe during the 2011 walk to work demonstrations.

Although Kayihura was axed on allegations that he had plotted to overthrow Museveni, two facts about the incident makes this claim laughable. He was axed just at the same time he was a wanted man at the ICC in the Hague over human rights abuse and returning the Rwandan refugees to Rwanda where many reportedly came face to face with the Country’s President’s repressive wrath.

Upon prosecution, Kayihura who had been accused by the public of attempting to overthrow a democratically elected government was surprisingly charged with the very crimes for which he had been indicted at Hague. This meant that under the legal principle of double Jeopardy under which one cannot be charged twice for the same offence, Kayihura was shielded from the Hague based ICC.

Within just less than two month of incarceration, he was released on bail and has since enjoyed his freedom while keeping a very low profile away from the public and media appearances. This all gives sense to some schools of thought that have maintained that Kayihura’s arrest and subsequent prosecution in the Ugandan courts was actually an act by the president to shied his fearless keeper from the wrath of the uncompromising ICC.

With the challenge of a more energetic and generally unpredictable opposition under the Kyadondo East MP Robert Kyagulanyi Ssentamu, we have reliable learnt that the return of the two master tacticians – Mbabazi and Kayihura is on the card.

With Mbabazi’s return nearly a confirmed certainty, the only doubt remains whether the former Police chief would be willing to come back and serve under the regime under whose leadership his fall seemed too embarrassing.

Closely analysed however, there are a few strong reasons that would make Kayihura over look his embarrassing fall and make the unexpected return once called upon. Among these include revenging against Gen Henry Tumukunde, the former Security Minister who worked around the clock to see to it that the fallen police chief is exposed which later saw the end of his decade long reign as chief cop.

Another reason is the desire to say thank you to President Museveni for saving him from the sure retribution in the foreign land at the hand of the deplorable ICC.

If these reports are to be believed, it’s likely that Kayihura would return to serve in any of the military organs of the country. Having already established himself as a master of mobilization, with the mobisation of over 10 million Ugandans under the crime preventer project on his already impressive CV, the prospect of him evolving into an important mobilization architect for 2021 and later into the Cabinet is not an exorbitant one at all.

The Speaker of Parliament, Rebecca Kadaga has congratulated the all new female leadership of the Uganda Law Society (ULS), a...

Over the weekend, a video clip of a young lady who was allegedly caught red handed night dancing made rounds...

Col Frank Bagyenda Kaka has turned down an ambassadorial offer from President Yoweri Museveni a few days after sacking him...

The government of United Kingdom has been accused of “institutional prejudice” for failing to give an automatic peerage to John...

The Ministry of Gender, Labour and Social Development has cleared external labour companies to resume recruiting migrant workers who want...

Video: What Bobi Wine is doing at home after voting himself in Kyadondo by election

How motocross boss making billions from drugs made from his kitchen house was netted by police, Americans