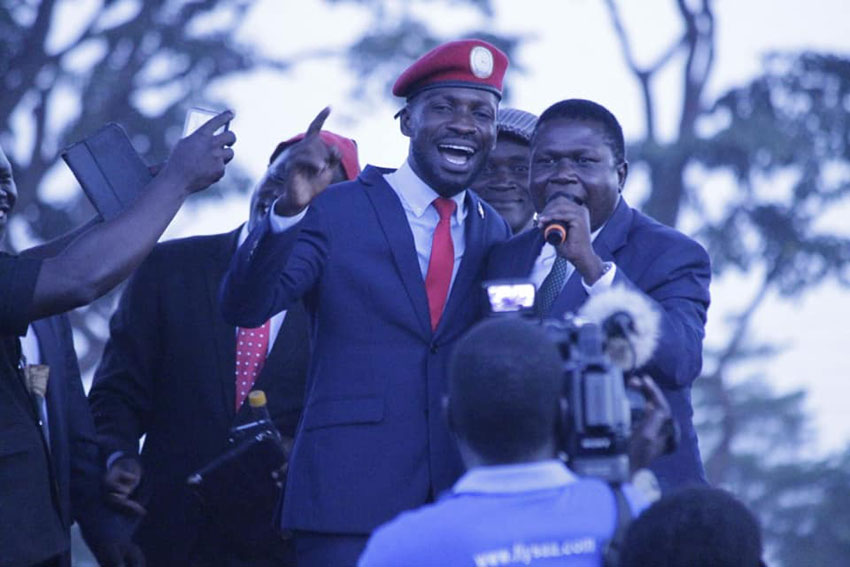 Democratic Party President General, Norbert Mao has hit back at his critics who have often accused him of instigating a fight against Robert Kyagulanyi Ssentamu, reminding them that he has been Pro Kyagulanyi long before most of his current accusers joined the wagon.

In a letter posted on the DP official website, Mao informed that his respect for Kyagulanyi and opinion has always been the same since his election to Parliament in 2017.

“My first real post for the day is an article I wrote immediately after the Kyadondo East by elections. My views are still the same. At that time many who now sing the praises of the Kyadondo East MP and presidential aspirant were not amused,” Mao said in the statement.

The former Presidential candidate referred to Kyagulanyi as probably the first true national leader to emerge from Buganda in post independence Uganda.

He goes ahead to fault the political opportunists who are using the name of Kyagulanyi to attain individual glory at the extent of the wider struggle.

“The political chattering class of Buganda that always studies the way the wind blows before making a move were thrown into confusion,”.

Here is what it says

In his book How The Mighty Fall, Jim Collins wrote “When you are at the top of the world, the most powerful nation on Earth, the most successful company in your industry, the best player in your game, your very power and success might cover up the fact that you’re already on the path of decline.” Failure lurks in the shadows of success. Jim Collins called this lurking and ever present danger “the silent creep of doom”. It is the journey from being an icon to being irrelevant or even a nuisance!

The question Jim Collins tried to answer in that book was—how would you know? Actually you never know. Whether you are the Roman Empire, the British Empire, or ancient Egypt. Whether you’re Gadaffi, Mubarak or Mobutu, you never know. That begs another question.  Why? The answer lies in what is known as hubris? Simply stated hubris means exaggerated (bordering on foolish) pride or self confidence.

Robert Kyagulanyi aka Bobi Wine dived into the old boy’s political pool and managed to displace those who had grown complacent and turned the political pool into their exclusive habitat.

But Bobi Wine’s victory should not leave a bad taste in anybody’s mouth. As a candidate he had a good grip of the pivotal factors that make for a successful campaign. First, has a compelling personal story of rising as a folk hero of Uganda’s underdogs whose plight he captured in his well loved music. He turned stumbling blocks into stepping stones. And the biggest stumbling blocks in Kyadondo East became his biggest stepping stones. He has remained true to his roots. Dubbed the ghetto president, he truly represents a kaleidoscope of interests. Ghettos worldwide are not of any exclusive group. Ghettos are melting pots. Bobi Wine personifies that melting pot and that is why he won.

Second, he had a coherent message demanding for inclusiveness of all in political decision making bodies like parliament. This message appealed to the voters who feel that the political upper crust is deaf to their cries. He personified the frustration of young people whose cries remain unheeded. Through song, he has highlighted teething social problems. Music worked but only up to a point. He watched in dismay as his fellow musicians fell for the seduction of money and power when they turned into a chorus of regime praise singers. Perhaps he came to the conclusion that he also had to be in the halls of decision making. In Bobi Wine, the downtrodden see some one to amplify their cries of agony and perchance get a response. If the parliament cannot go to the ghetto, then the ghetto has to go to the parliament. That alone has a lot of meaning whether Bobi Wine gets anything done or not.

Third, the structure of Bobi Wine’s campaign was shapeless. That lack of shape and structure inoculated the campaign against predatory forces that would target key campaign team members and compromise them. The team was a catch-all operation. All parties, religions and ethnic groups were represented. Bobi Wine presented himself as a “mukosa chama, mukosa dini, and mukosa kabila”. No party, no religion and no tribe. His only trademark was an abhorrence for the status quo. It was a disruptive, insurgent anti establishment campaign. He crafted an unstoppable bandwagon that invited any willing person to board.

Fourth, in the months that preceded the final nullification of Kyadondo East elections and thus making the seat vacant,  Bobi Wine seems to have started mobilizing a sizable campaign war chest. The logistical operations behind those displays of support, the blaring sound systems, modern stages, convoys and trailers all cost money. Bobi Wine, given his business acumen and connections did not run a pauper’s campaign. His financial muscle was able to withstand the NRM’s blitzkrieg.

NRM Secretary General Kasule Lumumba jumped to congratulate Bobi Wine even before final results were announced. The People’s President followed. The Commander in Chief of Defiance had been effectively defied. We all joined in sending cordial messages of congratulations to this new political star – probably the first truly national leader to emerge from Buganda in post independence Uganda. The political chattering class of Buganda that always studies the way the wind blows before making a move were thrown into confusion. They were loud by their silence and conspicuous by their absence. All party leaders must be contemplating this phenomenon. It is not new. Only its champion is new. Fortunately politicians are adaptable and not allergic to humble pie.

BETTY NAMBOOZE: Dear Hon. Norbert Mao, we are fed up with your toxic leadership