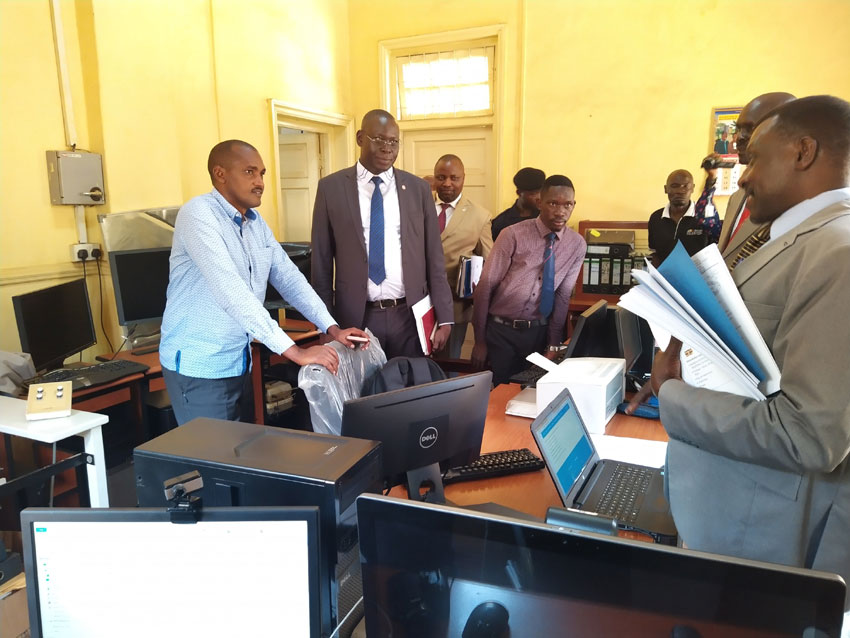 Gender Minister Frank Tumwebaze [L], the Permanent Secretary James Ebitu[2L] during the inspection of the National Library in Kampala on Tuesday

The Minister of Gender, Labour and Social Development, Hon. Frank Tumwebaze has directed officials at the National Library of Uganda (NLU) to expedite the review of the policy that governs the libraries and publishing sector.

While inspecting the NLU headquarters in Kampala on Tuesday, the Minister noted that the current policy framework had been overtaken by time and this was affecting the functionality of public libraries.

“The culture of reading is an asset and a resource. Knowledge is wealth and it’s actually the future. We therefore urgently need a policy framework to guide publishing and libraries in Uganda,” Tumwebaze observed.

He said this would go a long way in safeguarding the readers against objectionable content but also take care of the publishers’ intellectual property rights.

Recalling his days as a student at Makerere University when they utilised the library along Buganda road, Tumwebaze said libraries shouldn’t be an option but necessary facilities established in each local government because people need them as information reference points.

“For example, libraries should be places where people easily access government policies and laws and all other authentic publications like reports,” he said, adding that Libraries need to be established whether private or public, but under a uniform regulatory framework.

On the advent of information overflow online, the Minister cautioned that not all information off internet is authentic and should be used with caution depending on the source.

“We can’t have a generation that purely depends online. We must strengthen libraries because its stock up can easily be restricted to authentic content.” He noted.

The acting Permanent Secretary, Ministry of Gender, Labour and Social Development, Mr. James Ebitu revealed that the review of the policy had been discussed at top management level and additional inputs were being made before it’s forwarded to Cabinet for approval.

He was optimistic that the proposed changes would enable the libraries operate in a manner that fits the current information age.

He also revealed that plans are underway to repossess NLU land in Nakawa for construction of a facility to house the libraries headquarters.

Currently, NLU which operates under the gender ministry is resident in a rented building along Buganda road in Kampala.

The NLU Director, Mr. Adonia Katungisa said there are currently 42 operational public libraries and over 100 community libraries in Uganda.

He said its NLU’s mandate to collect, organise, preserve and disseminate Uganda’s documented heritage and also oversee local governments and communities in the establishment and management of public and community libraries, and also take lead in promoting a reading culture in the country.

Katungisa added that it’s among their objectives to develop sound library services, plans and policies related to national development policies, priorities and aspirations and promised to ensure that the policy review is completed.