Kadaga: Uganda will cease being the Pearl of Africa if we keep cutting trees 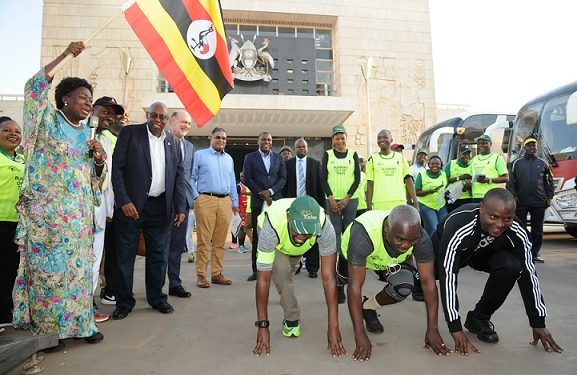 The Speaker of Parliament, Rebbeca Kadaga has said Uganda’s beauty will soon be no more in a few years if tree cutting is not controlled.

Kadaga, who was flagging off runners on Friday and at the same time launching the ‘Running out of Trees Campaign’, expressed her worries on the way authorities and public have carelessly continued cutting trees while forgetting about their lives in future.

The campaign, in conjunction with Ministry of Water and Environment (MWE) and Uganda Breweries Limited (UBL) is aimed at raising awareness about the adverse impact of tree cutting activities on the environment.

“Our country is slowly fading. We need to plant more trees. If we don’t plant trees we are bound to lose the beauty of our motherland,” she said, adding that cutting trees has led to serious climate change effects.

She vented her frustrations at the Finance Ministry for always slashing money meant for planting trees from the Budget.

The rate at which Uganda is losing its forest cover has significantly increased since 1990, and according to UBL Board Chairman Japheth Katto, the campaign also calls upon the public to plant at least one tree a year for five years.

According to the statistics of National Forestry Authority, Uganda lost over 2.4 million hectares of forest cover between 1990 and 2015. This translates to an annual loss of 96,000 hectares – or about 96,000 football pitches.

Still, in the same period, the forest cover outside protected areas reduced from 68 per cent of the total forest land area in 1990 to 38 per cent in 2015, almost half of the non-gazetted forests was cleared in 2 decades and a half.

About the Running out of Trees Campaign

Running out of Trees Campaign is a two-day relay campaign featuring 33 registered runners from diverse sectors. Each runner will cover a distance of 10km and shall be flanked by several pacesetters. At every 10km mark, each runner shall then pass a baton to the next. The entire run is 330 km.

Kampala-Gulu road was selected the first-ever tree relay run because statistics show that it is the area that has been worst affected by deforestation in the country. Over the next four years, a different side of the country will be chosen as the relay becomes a calendar event reminding Ugandans of their roles of planting at least one tree in that calendar year.