by Stephen Kalema
in National, News
10 0 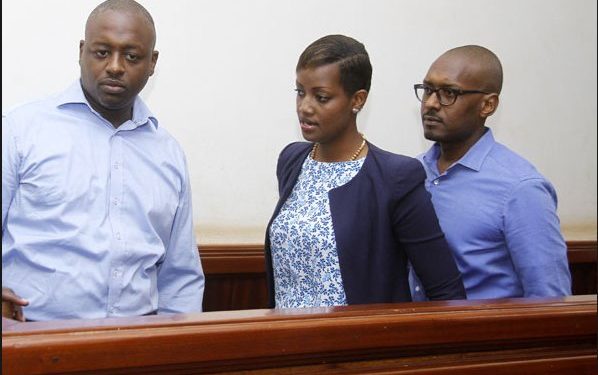 The trial against the businessman Matthew Kanyamunyu, who is accused of murdering Kenneth Akena, a child rights activist resumed on Thursday with prosecution presenting their eighth and ninth witnesses.

Kanyamunyu, and his girlfriend Cynthia Munwangari and are accused of shooting Akena on November 12, 2016.

However, the two deny the charges, saying they were helping the deceased whom they found already shot.

Of the nine witnesses who have so far testified in court, were medical officers who carried out the postmortem on the body of Akena.

These include one, who was code named X for security purposes.

During the cross-examination, X told the court that a bullet was logged in the deceased’s rectum.

When asked how he compiled a report while examining the body, X said, “As we examined the body my Lord, we made some rough notes which we later recompiled to make the entire report. However, right here I have the final copy which I can produce before the court.”

According to X, the bullet entered the deceased from the chest, through the diaphragm to the stomach and settled in the rectum.

However, the defence side asked the trial judge Steven Mubiru to prompt witness X to produce the rough notes he made by his hand while examining the body because the one which was presented before the court had a lot of loopholes as per the explanation of witness X.

X also failed to remember the number people who were present while conducting the examination. He, however, confirmed to the court that since the body tissues inside were bleeding an operation was to be conducted to arrest the bleeding.

In regard to his statement, the defence said that the death of Akena was not the bullet but the surgeries which were made on him promptly.

When the asked if he could confirm to the suspicion of the defence side, X said ‘no’ neither was it a contributory factor at all.

The eight witness was a police Officer Ogwang Deo who conducted a search at both residents homes of Kanyamunyu and Munwangari in Luzira and Butabika Royal Palms respectively.

In his narration to the court, Ogwang said that he first went with Kanyamunyu and his girl friend’s brother Raul Munwangari and made a search for any firearm in both homes.

According to him while at Luzira (Cynthia’s home) Kanyamunyu freshened up and changed his shirt (Long-sleeved sky blue) and put on a white T-shirt. At Butabika he changed the jacket and trouser both navy blue. They went back with him at Jinja but no firearm was found in any of the homes.

On reaching the Police station (Jinja Road), they were told to go back and bring the clothes Kanyamunyu had removed which they did.

According to the defence, although they went and collected the shirt, they didn’t carry any DNA test on it to find out whether it belonged to Kanyamunyu since Cynthia’s brother also sleeps in the same house.

Police also failed to profile the DNA test on the navy blue coat and a trouser which raised a lot of queries in Ogwang’s testimony.

The ninth was detective Sgt Alo Patrick whom first recorded a verbal statement with Kanyamunyu. However his testimony was cut off due to time and the Justice Mubiru adjourned the court up to February 11, 2020 at 2:00pm.