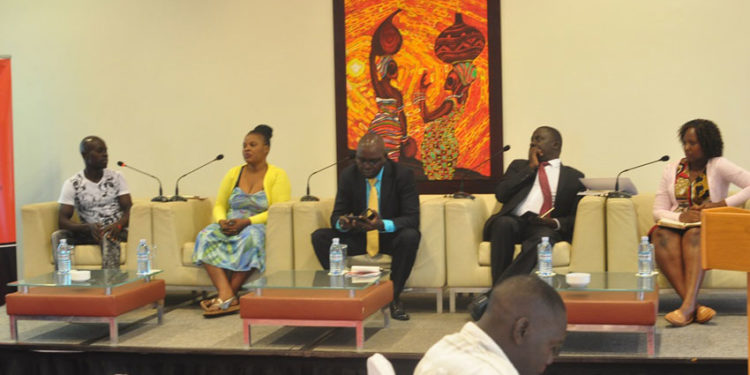 Panel discussion during the launch of a preliminary report —Uganda’s Digital ID System: A cocktail of discrimination that took place on Tuesday in Kampala.

Unwanted Witness, a civil society organisation has tasked government to enhance transparency around the National Identity Card system as a way of ensuring data security, safety and accessibility.

The call was made during the launch of a preliminary report —Uganda’s Digital ID System: A cocktail of discrimination that took place on Tuesday in Kampala.

Dorothy Mukasa, the Chief Executive Officer of the organisation said concerns are rising about data security, opening up a new discourse on the infringement of economic, social and cultural rights as the implementation of the national ID system is increasingly being used to control citizens’ access to vital public and private services.

“As Unwanted Witness, we support the issuance and self-assertion of IDs, as a key enabler to empower citizens to engage in the modern economy with the modern state. But we recognize that there are significant risks to such technologies and systems. In the past, one would flash any legal identification document issued by government to access SIM card, financial services or public service, now days all these are restricted to National ID,” she noted.

“We believe that it is essential to limit the purposes for which an identity system is built and in turn used. For instance, a system designed to manage people’s tax contributions and benefits shouldn’t be sued for nationality purposes, because single purpose mandatory system is prone to abuse.”

Ms Mukasa further revealed that through the research, they discovered that 85 per cent of Ugandans have been denied services in terms of health care, education, financial inclusion, right to movement because they do not have a national ID.

“So this is a wake-up call to all actors including government to check on the voices of ordinary Ugandans who have nowhere to run to. They are being tossed left and right. You go to National Identification and Registration Authority [NIRA] and spend three years chasing after a single ID. Meanwhile you cannot travel outside the country because you don’t have a passport, you cannot get a loan from the bank if you don’t have an ID, you cannot even open up a personal bank account because you don’t have an ID. As government is pushing for inclusion in various services, then the national ID is becoming a stumbling block.”

Butambala district Member of Parliament Muhammad Muwanga Kivumbi decried NIRA’s failure to issue National IDs to all eligible Ugandans yet they have all the required resources to fulfill their mandate on time.

“NIRA has all the resources they need to do their work but they just lack absorption capacity. It is a privileged organization in that sometime we have to compromise other agencies in terms of allocating funds at its expense. Even last time the organization had to return over Shs8 billion to the treasury after failing to spend it.”

According to the NGO’s findings, out of the total population sampled, only 12 percent of the respondents had obtained their national IDs at the time of the study. A proportion of 88 per cent had submitted their registration forms but had not received their national IDs having waited for a period of over six months as opposed to the three-month stipulated time.

Currently, over 2.8 million Ugandans are yet to receive their national IDs despite applying for them.

NIRA’s Public Relations and Corporate Affairs Manager, Gilbert Kadilo, says so far 28 million national IDs have been printed and they are looking forward to issue 10,000 cards per day to ensure that every Ugandan of 16 years and above is covered.

“As NIRA we have proceeded to acquire active offices and I would like to reassure you that we have changed our business model. Today we are able to issue IDs within 2-3 weeks after registration, a turn-around time from the three months. We are working around the clock to deliver and satisfy our people,” said Mr Kadilo.