by Stephen Kalema
in News, Politics
45 3 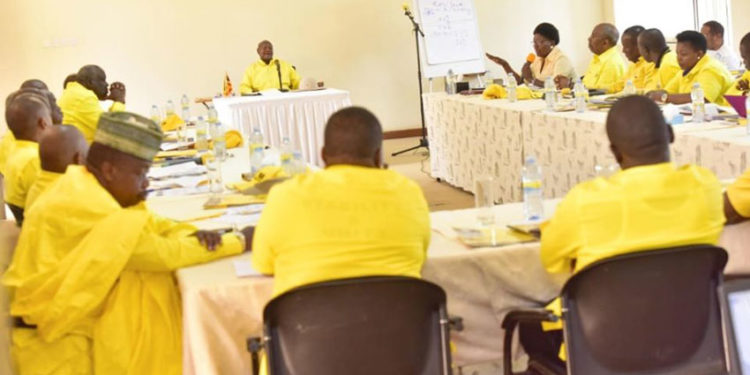 The Central Executive Committee (CEC) of National Resistance Movement on Thursday while at Entebbe State House discussed the proposed amendments of the ruling party constitution.

In the meeting CEC adopted lining up as a favourable voting method during the party internal elections.

On Friday still at State House also when the proposal was presented before the National Executive Committee (NEC) it was seconded by the members.

During the NEC meeting, the proposal was first seconded by the party chairman President Yoweri Museveni who said that the lining up behind candidates will solve a lot of troubles that have been characterized by the secret ballot system in the past.

“Secret ballot is costly logistically and also doesn’t solve the problem of cheating, because lining up is clear. Nobody can say I was cheated because everybody will be observing,” he said.

Having confirmed it by both top party organs CEC and NEC, the resolutions will be presented before National delegates conference at Namboole stadium for the final approval today Saturday before it’s put into practice in the forthcoming party elections for flag bearers who will race in next year’s general election.

However here are the 10 reasons why CEC and NEC decided to adopt the lining up voting system, according to party spokesperson Rogers Mulindwa:

1. Reduction in logistical and financial costs. There will be no procurement of ballot papers, buckets, indelible ink, pens and basins among others.

2. The method will provide for a desirable Party cohesion because of being transparent.

3. It will also uproot multiple voting

4. Lining up style will reduce on temptations of election manipulation and commercialisation of politics

5. Reduction in costs of administrations which the party has been grappling with.

6. It will cure challenges of elections postponement due to delays in production, packing and transportation of huge volumes of election materials.

7. Lining up will be in conformity with the National Laws of Uganda especially the Local Government Act.

8. Lining up method will help in curing the allegations of ballot stuffing.

9. It will eliminate and make extremely risky the phenomenon of election managers swapping results.

10. Allegations of ghost Polling Stations will be also eliminated.