by Allen Kisakye
in Entertainment, Showbiz
221 5 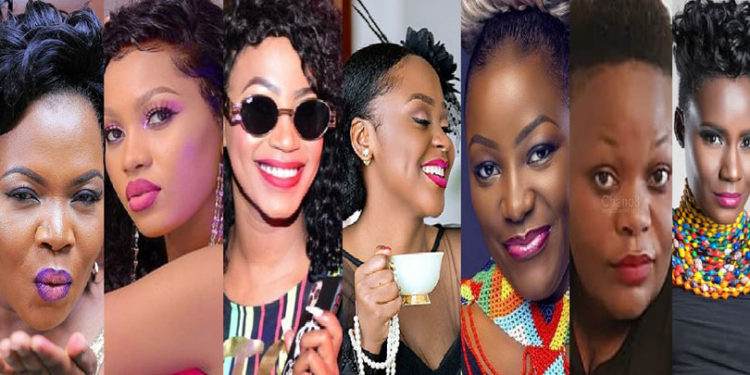 Like for some male artistes, music has greatly been rewarding to several female performers too. And you can be wowed on hearing what many have managed to collect and invest in, through the money got from music.

These artistes have accumulated most of their wealth through various avenues like, music loyalties, endorsements deals,concerts, among others.

In no particular order, here is the list of richest female artistes in Uganda;

She is arguably one of the biggest artistes in Uganda currently, Spice has earned a lot through her music concerts, shows both local and international, selling music online, endorsement deals with various companies like Itel Uganda, Yaket drinking water among others. The singer is currently building a multi-million mansion along salaama road. She also owns a music studio.

Despite her beauty and hard work, Rema is one of the most successful female artiste in Uganda, she has also earned a lot through selling music albums online, stage performance, concerts, paid partnerships and endorsement deals with various companies like Jesa Milk, Hema mineral water among others. She is also constructing a multi-million mansion in Namugongo.

Namatovu and her husband Geofrey Lutaaya are also earning a lot in silence, the couple has invested their money well and currently they own several hotels and Restaurants in Makindye and Kabalagala, they have apartments in Ggaba and Makindye, they have farms in Masaka, kakuuto among other places. Namatovu also co-owns Da Nu Eagles, a band that’s still earning her lots of money.

Kusasira is also one of the richest female artistes around town, she owns a couple of apartments and rentals in and around Kampala, the singer also has beauty company that produces Kusasira beauty cream, lotion and soap. She also earns from being a close associate with President Museveni who even made her his presidential advisor on Kampala affairs.

Sheebah is one of the few female artistes with visible assets and establishments, acquired through music success. She co-owns a hairline called Sheebah by Natna, recently opened a sanitary pad company producing Holic pads, owns a mansion in Munyonyo. And she is among the top five artiste who earn a lot of loyalties from music played/sold on online music platforms and local media.

Being one of the biggest female performers back then, Nakimera managed to collect a lot of money from her music which she invested wisely. Its said that she also inherited some wealth from her family and husband. Nakimera owns various apartments in and around the city, she has many agricultural projects on her own land that she owns in Lugazi, Wakiso among other areas, and also runs a charity organisation that helps elderly people in rural areas.

She is one of the best gospel artistes in Uganda and this has made it easy for her to accumulate a lot of wealth out of her music. Babirye earns a lot of money through performances and selling music on various music platforms like Amazon, ITunes, Spotify among others. Because of her found music fame, the singer was also elected in 2016 to represent the people of Buikwe District in Parliament.

Despite being a royal Princess of Tooro Kingdom, Juliana is one of the female artistes who have earn a lot from music, she has greatly sold her music on online music channels like Spotify, iTunes, Amazon, and managed to invest it wisely. Through music, Juliana got so many good ‘friends’ who have greatly supported her lavish lifestyle, and currently she is in Netherlands where she went to give birth.

Other female artistes on this list include Maureen Nantume, Angella Katatumba, Stabua Natooro among others.

DR SUDHIR RUPARELIA: How we confronted 2020 the hardest year of our 30-year-old business conglomerate