by Mubiru Ivan
in Entertainment, Showbiz
95 4 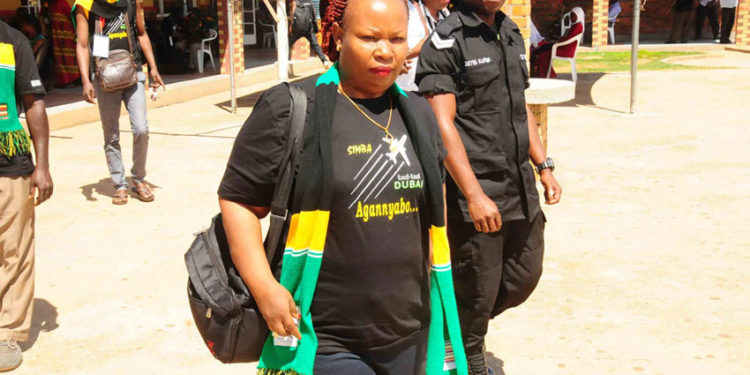 Sophia (Sylvia) Namutebi famously known as Mama Fiina is a Ugandan businesswoman and also leader of traditional healers in Uganda.

Early this week, following the demolition of St Peter’s Church Ndeeba in Kampala, Mama Fiina made a big statement.

Mama Fiina, a renowned traditional medicine woman, who among religious people would be addressed as a “witch doctor” condemned the ungodliness of Christians who destroyed a House of God. She said, they should be “pagan”.

She donated sh4 million to answer to the call of the archbishop of the church of Uganda, Dr Stephen Kazimba Mugalu, who called upon people of good will to donate generous to raise this church on the ground.

Mama Fiina handed the money to Salongo Wakooli one of the church leaders. She is of one of the biggest Ugandan philanthropists.

2.Being from a humble family, she dropped out of school at an early age and gave birth to her daughter Safina (abbreviated as Fiina). She worked as a maid to support herself and her daughter. When she was 16 years old, she relocated to Kampala, Uganda’s capital city, where she began hawking merchandise on the streets.

3.That was in 1995. Maama Fiina, started with an initial capital of Shs38,000 to buy polythene bags which she started selling at Mini-Price, in down town Kampala. She says she does not earn from witchcraft as many would assume.

“I was hungry to increase this money because I was not only going to blame myself but the woman who had given me the capital. I learnt that when fellow hawkers bought polythene bags from us, they would sell them at a profit in the Old Taxi Park, so I changed my working station to the park. There were more people, more business and generally I saw an opportunity to sell more,” Mama Fiina told Daily Monitor in 2014.

4.Her first duty stations were at the Kayunga, Mukono and Jinja taxi stages. She says she was both hardworking and lucky.

“I found the polythene bag business profitable. After six months, my business was worth Shs160,000. Then a friend told me that we can go to Nairobi and buy clothes in wholesale and sell at a profit. I bought into the idea, saved more and travelled with her to Nairobi. That introduced me into the fabrics business,” she explained.

After four trips she recalls making a profit of Shs800,000. She kept at it and in three months, she realised profits of Shs3 million. She was really very strict and saved every penny.

“In November 1996, I felt I wanted to start rewarding myself a little. I had dreamt of driving a car. By this time, one could buy a second hand car at Shs1.4 million,” she recounted.

“But right about the same time, a gentleman, who would later become my boyfriend, drove past me around Namasuba one midmorning. He bought me a phone and gave me Shs7 million cash. I was excited. I used part of the money to buy a Matatu. From one Matatu I was able to save and buy another, and another,” Mama Fiina said.

5.Along the way, she met her ex-husband Ali Kyonjo with whom she was able to broaden her business horizons.

“I had more money than he had but he was immensely industrious. At this point, I went into importing and selling gomesi attires. In 1998, I made my first trip to Dubai to go and shop for merchandise. All along I never for a day forgot that I was not educated and that I could not afford to mess with my businesses,” she recalled.

6.Namutebi revealed that in 1999, she had four commuter taxis plying the Kampala–Jinja Highway, each valued at Shs8.5 million.

With the commuter taxis and the gomesi business continuing to bring in income, she diversified into the motorcycles [bodaboda] business.

7. Her other investments include garment shops in downtown Kampala, Masaka, and Mityana.

8.She has real estate investments in residential and commercial property in various locations in the country. She is also involved in the importation of used cars from Japan for sale to retail customers.

“Distribution of my business into different items and entities has helped spread my profit since out market is not predictable.”

9.In September 2017, Mama Fiina married her current husband Ismail Ssegujja, a businessman. The wedding took place at Kololo Mosque. She has been married in the past, to the late Major Major Muhammad Kiggundu who was assassinated in November 2016. She was previously married to Kyonjo, who was her husband in 2014.

10. Mama Fiina is a renowned supporter of the ruling party NRM. She is also a very close friend to President Yoweri Museveni.