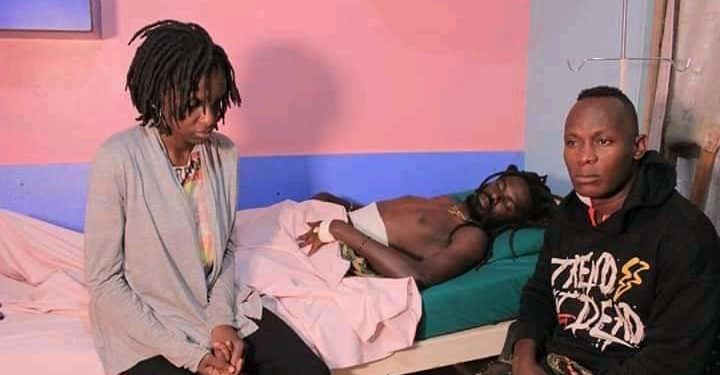 Buchaman with his wife at Malcom Clinic on Friday

As Presidential envoy to the ghetto Mark Bugembe aka Buchaman groans in pain after sustaining injuries following his brutal arrest by police early this week, his wife Ms Nangajja Clair has demanded that her husband be provided with security or else she won’t let him return to work when he recovers.

Nangajja who is popularly known as ‘mama ghetto’ made the remarks during an interview with a local TV station on Saturday where she faulted Police for what she called “disrespectful manner”  in which her husband was arrested regardless of his status as an envoy of the President.

She also faulted the arresting officers for failing to accord Bugembe a special treatment during the arrest due to his physical disability.

“My husband is lame and everyone knows that very well. Why use all that force against him especially when it was clearly seen that he was not resisting the arrest, ” She exclaimed.

Eventhough she and her husband  are strong supporters of the ruling party – National Resistance Movement, she says her fear for the safety of the presidential advisor is what has made her consider keeping him away from the dangerous work environment lest the worst happens to him without security.

She says the recent ugly incident has taught her and the rest of the family a big lesson and she vowed not to take chances.

“What I am saying is that where can I get the guts to let him move out of the house again while going to work under these hostile circumstances! ” She further wondered.

” I am therefore appealing to His Excellency the President to provide his loyal servant with the security befitting of a Presidential advisor, an office he was appointment to, ” She continued.

Buchaman was violently arrested  last Thursday in Lugala Masanafu on allegations that he had mobilised his ghetto youths to sabotage a meeting organised by NEMA officials who were trying to assess the impact of the catastrophic Victoria water levels along the shores of Lake Victoria.

He was subsequently detained at Katwe Police station from where he was admitted to Malcom hospital in Kibuye with excruciating pains caused by the police beatings.

He has since been moved to Nakasero Hospital from where he is receiving specialised medical attention.