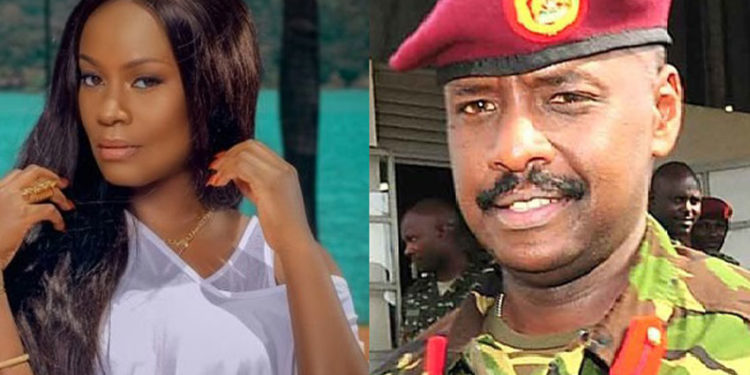 The mystery surrounding the paternity of singer Juliana Kanyomozi’s newborn baby has sparked off rumors on who the father of the boy could be.

One of the names that have been thrown on the list of those suspected to be father of Baby Taj is First Son and President Yoweri Museveni’s advisor for Special Operations Lt Gen Muhoozi Kainerugaba.

A notorious Facebook page named ‘Top Secrets Leaked’ claimed that it had information to the effect that Lt Gen Kainerugaba had abandoned Juliana after she gave birth, and told her he wanted a DNA test to prove if he was the father of Baby Taj. The same page also claimed that Juliana had regretted why she paused her music career for an affair with the First Son, only to be abandoned at the time when she needed Museveni’s son the most.

“THIS IS A HOAX!!!! Treat it with the contempt it deserves!!!! Thank you,” wrote Juliana Kanyomozi.

By dismissing this allegation, Juliana has set the record straight that the First Son is not the father of Baby Taj and should therefore be struck off the list of probable fathers being compiled by social media investigators.

The denial also means that Juliana may not be having any issues with the father of her son but has refused to tell the world who he is because she feels it is not the right time to do so or has no reason to reveal Baby Taj’s paternity.

It should be remembered that Juliana kept her pregnancy a top guarded secret for nine months, only to surprise her fans with the news. She has since been sharing photos of her pregnancy, and could, maybe, reveal the father of the baby at her appointed time.