by Allen Kisakye
in Entertainment, Showbiz
265 17 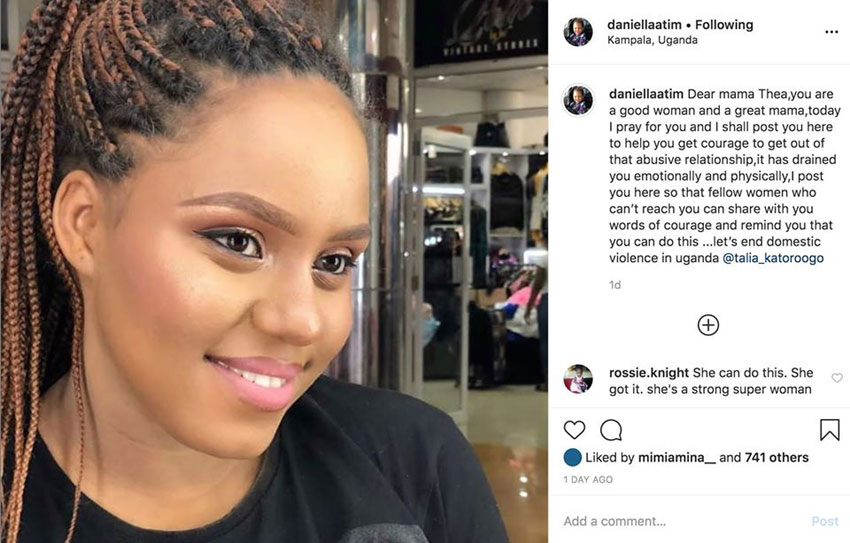 ‘Let’s end domestic violence in Uganda’, it’s a new trend on instagram after Daniella Atim, a wife to singer Joseph Mayanja aka Jose Chameleone came out to advise his brother-in-law’s wife to walk away from her violent relationship.

According to Daniella, her brother-law, also singer Weasel Manizo has been so violent to his baby mama Talia Kassim on several occasions, leaving her emotionally and physically drained.

Talia has been in a relationship with this remaining half of Goodlyf music duo for quit sometime, and the couple has two children now, but Daniella claims that Weasel turned Talia into a punching bag, something she couldn’t witness happening anymore.

“Dear mama Thea, you are a good woman and great mama, today I pray for you and I shall post you here to help you get courage to get out of that abusive relationship. It has drained you emotionally and physically, I post you here that fellow women who can’t reach you can share with you words of courage and remind you that you can do this…lets end domestic violence in Uganda,” Daniella posted.

Though this message was initially directed to Weasel’s girlfriend, Daniella’s fans applauded her for not remaining silent about the matter, and encouraged women in such violent relationships to quit them, for that’s a way to curb cases of domestic violence.

The ‘Stop Domestic Violence’ discussion is still ongoing on social media, but the main culprit Weasel has not yet come out of speak up about these allegations.

MC Kats: Fille's cousin Faith raped me and I'm going to sue her