Ann Ssebunya: A talented radio personality with a big heart to fight drug abuse in schools

by Brian Mugenyi
in Entertainment, Lifestyle
17 0 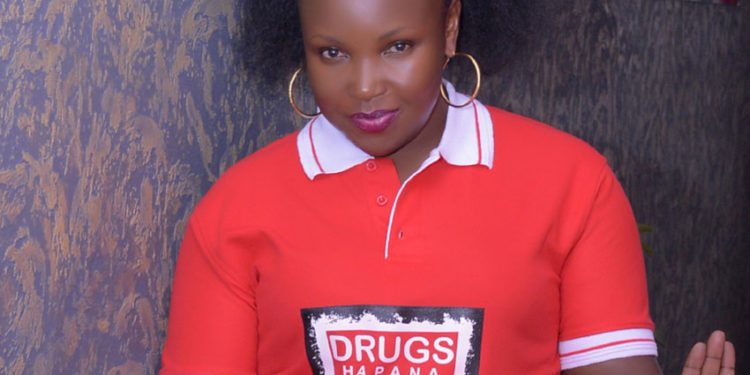 To many Annet Ssebunya alias ‘Ann’ is a famous radio personality at Central Broadcasting Service (CBS FM) whose lively voice leaves her listeners entertained to the maximum.

Maybe she was meant to run-through that circle ‘Entertaining and educating the audience’ of which the last eleven years Ssebunya has not disappointed her audience.

But away from her radio onuses, there’s more that meets the eye in Ssebunya. Deeply in her life there is a well-guarded force that compels her to give back to the public.

Born to Charles and Margaret Ssebunya of Ssenya village formerly in Masaka but now in Lwengo District forty years ago, Ssebunya also the second born in the family of seven has utilized the time she has been in public lens well thereby advocating for human rights especially students in Uganda.

“I started this initiative four years ago after realizing that different students in some schools had become drug addicts,” Ssebunya also a mother of one starts slowly with her serene voice as she takes a seat in a peaceful housing at her work place.

It is 11am and Ssebunya reckons with her tentative smile that away from Coronavirus disease (COVID-19) outbreak that has brought pandemonium in the whole world, taking drugs among students too is escalating.

“Most of the teachers and parents are just busy in their duties leaving their children vulnerable to the vice,” Ssebunya who also juggles the secretarial role in the office of CBS’s Programs Manager Abby Mukiibi shares.

She articulates that initially they had someone in the family who started using drugs at a very tender age but she prefers to reserve his identity due to sentimental reasons.

“It didn’t sound well in our family but later I had to stand tall to ensure that he recovers. Eventually I realized that you can take someone in a rehabilitation center and recover well which fascinated me to start sensitizing students about the dangers of drugs,” she says.

As for the beginning, Ssebunya crafted Drugs Hapana Initiative (DHA) as a way of reaching out to different schools. This can be loosely translated in English as; No to Drugs initiative and the first beneficiaries were; St Lawrence Schools. From then on, they have been able to reach out to the community members through advocacy trainings, and vocational skills training among students.

“At first some people thought we were joking. Very few took us serious until when we started receiving invitations from different schools to sensitize about the dangers of drugs among their students,” she adds.

They have been able to reach out to students in schools; St Lucia Namagoma, St Lawrence College, St Henrys College- Kitovu and Kinaawa High School and others.

She later received numerous testimonies from students themselves who were using drugs in schools but because of her intervention, they decided to pull off the plug and concentrated on their studies instead.

The most common drugs used are; tobacco in form of cigarettes, Shisha and Kuber, Marijuana (Weed), Mairungi (Khat), and some children from well-heeled families get access to cocaine and heroin.

“Recently a friend of mine told me of a student who was using his parent’s car as a safe place where to keep their drugs wherever they were going to schools and others were inserting them in their socks,” she reminisces.

In 2014, the World Health Organization’s Global Status on Alcohol and Health Report indicated that Uganda was the highest consumer of alcohol for each person (per capita) in the entire East African Region.

What is more worrying is that almost 90 per cent of Ugandans consume unfettered and illegally sold alcohol. Those who consume pure alcohol are said to consume 23.7 liters per person per year.

Since 2016, Ssebunya has been juggling Drugs Hapana initiative as well as her radio career and she has been able to link up with numerous people and organizations that have partnered with her fore stance Butabika National Referral Hospital and Buganda Land Board in order to cub the vice.

“Two years ago, we formulated Tuyambeko Butabika Campaign (translate) because we were commemorating International Day against Drug Abuse and illicit trafficking and the Parliament of Uganda joined our cause with
100 mattresses,” she recollects.

Ssebunya says many students are experimenting a lot; some are mistakenly viewing it as a status symbol well as others are considering alcohol and drugs as a mark of adolescence.

“Every now and then we see in public that teens are being held for consuming drugs and most of them are aged between 13 to 25 years,” Ssebunya testifies.

According to Ssebunya, girls can do and achieve anything as long as they are well mentored through vocational skills and guarding against teenage pregnancy.

“When girls feel confidence about their bodies, intelligence and sexuality, they go in the world focused and ready to face challenges and don’t need to rely on drugs for self-esteem,” she added.

Ssebunya recollects that growing up as a kid, there was a fixed idea that girls cannot become successful business women, leaders or event lawyers which today has been a vise versa.

“The speaker of parliament is a woman. That alone is an indicator that girls can become who they want as long as they believe in themselves,” she added.

Among the challenges Ssebunya has faced are limited resources such as bed sheets, funds and scholastic materials that can be given to students as a way of motivating them.

“People have been very positive to us and my CBS FM and Buganda Kingdom has been very crucial in supporting my cause. The headteacher of St Henry’s College –Kitovu Brother Augustine Mugabo too has been very supportive,” she added.