by Allen Kisakye
in Entertainment, Lifestyle
6 0 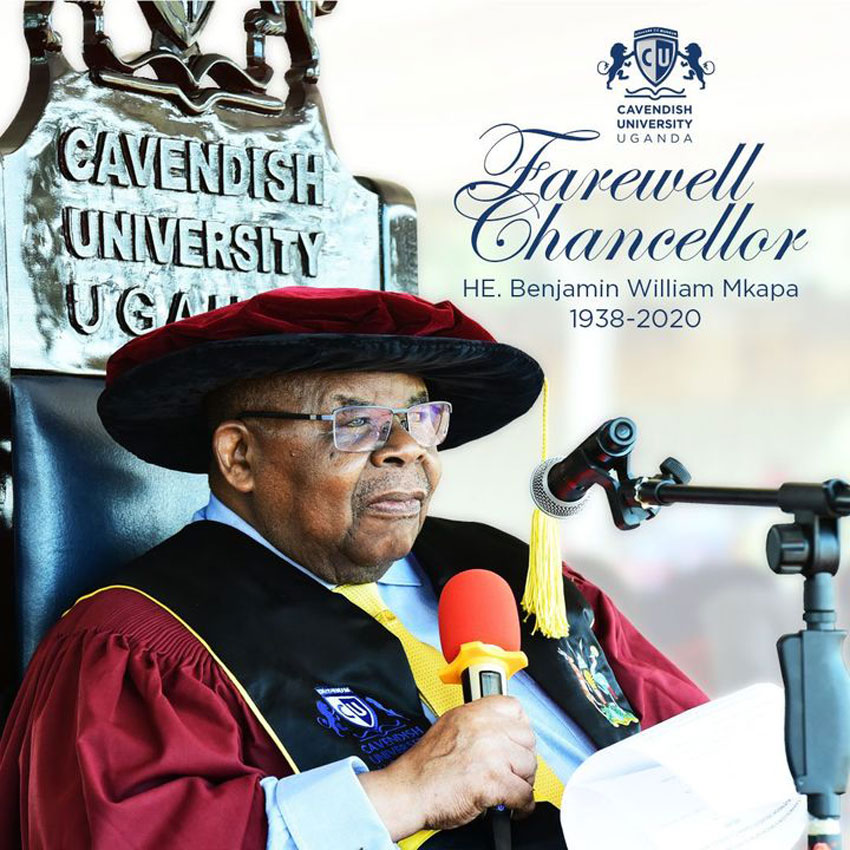 H.E Mkapa was installed as the University’s Chancellor on December 5, 2014 in an event that was presided over by then then Chancellor of Makerere University, Prof. George Mondo Kagonyera.

He served as the Chancellor for six years out of the 12 years the University has been in existence, and he presided over 6,000 graduates representing 80% of the University’s graduation since it started.

For these and many other reasons, the University held a memorial prayer service at St. Peter’s Church Nsambya in Kampala, on Wednesday to honour and remember the positive contribution of this fallen statesman.

During the event, Prof John Mugisha, the University’s Vice Chancellor described H.E Mkapa as a person with a pure heart, generous, diplomatic, peaceful, and a great academician.

Prof Mugisha further shared that under Mkapa’s guidance, the University was able to employ an Online learning platform in 2014 which eased long distance learning, thus enabling CUU to full fill her number one mission of transforming students into responsible, employable and entrepreneur people.

“With the new online learning platform, study materials are uploaded online and students are connected with their professors and fellow students, they can chat, ask questions, share experience and also get virtual lessons which can be recorded and then viewed later for those who have missed the classes,” he said.

Adding that it’s the reason why CUU was able to maintain teaching and learning even after President Yoweri Museveni ordered a total lockdown following the Covid-19 outbreak in the country.

“Success is not automatic, you should prepare a strategy, commitment, hard work, sustainable focus without forgetting discipline,” Peter Tumukunde, a student at CUU quoted Mkapa’s speech during the University’s 9th graduation, saying that his colleagues will forever miss Mkapa’s ethical values, but they are happy that they lived to enjoy his years of warmth, wisdom and care as their Chancellor.

Prof. George Mondo Kagonyera also remembers H.E Mkapa as a noble man who considered no job or responsibility too small for him to handle and in one of his quoted speeches, he questioned fellow leaders to be role models and positive mentors of the new generation.

“What legacy do you leave behind as a leader. The important questions are, have we been good role models? Have we mentored a new generation in the right direction? What will they learn from us, not from words but from our actions! Are we building strong foundations that can outlive us years,” Prof Kagonyera quoted Mkapa.

Prof Kagonyera further applauded Mkapa for being an amazing man with a great personality as he recalled an event in which the ex-Tanzanian President was awarded his honorary PhD of Laws at Makerere University on November 27, 2009 for his excellent performance.

“Normally when heads of state come to receive their honorary, we give them somewhere to seat but when Mkapa came and I showed him where to seat comfortably, he said, ‘NO, I will kneel because that is how it is done’,” he said, adding that Mkapa humbly knelt before him throughout the entire exercise.

Senior Citizen John Nagenda also shared that he met Mkapa in 1957 during their first year at Makerere University. He noted that although they didn’t know each other very well for the first two years at Makerere, later their friendship grew solid and he recalls that they used to argue like 500 times every year but their friendship still remained unstoppable.

“We can only say, thank you so much for your contribution and may the almighty God forgive his imperfections. I would request that we individually or collectively should celebrate Ben’s life and also pray that his soul can continue to rest in peace,” he said.

Apart from being a great Chancellor, friend, workmate, colleague, a great catholic and husband, Mkapa was also an excellent writer and before his death, he had published several books which include My Life My Purpose, A Tanzanian President Remembers, The Mkapa Years, Collected Speeches, among others.

In honour of Mkapa’s legacy, CUU promised to hold an annual memorial lecture and Scholarship programmes in the names of Mpaka to forever celebrate his positive contributions to the University.

Panic in Rubanda prison as inmate tests positive for Covid-19